Wait for affidavit to know govt's stand on Rohingyas: Rajnath 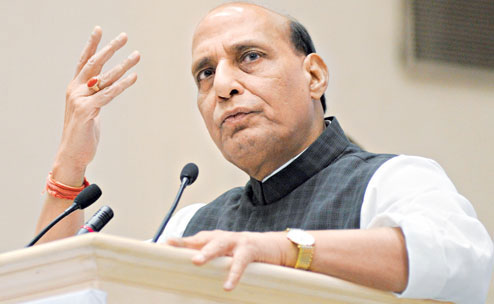 New Delhi: Home Minister Rajnath Singh on Friday said the government will inform the Supreme Court of its stand on the Rohingya immigrants on September 18, and refused any further comments on the issue.

Asked about the politics over the Rohingya refugees, a persecuted community of Muslims from Myanmar who have fled the country in large numbers, the Home Minister said: "Whatever affidavit we have to file, we will file on September 18."

The Supreme Court has fixed Monday for hearing of a plea challenging the government's decision to deport illegal Rohingya Muslim immigrants back to Myanmar.

Several Union Ministers, as well as ministers in the Assam government, have in the past said that the Rohingyas are illegal immigrants in India and will have to leave the country.

An affidavit on the issue, which the government later said was just a draft and being worked upon, was leaked after it was inadvertently served on the counsel for petitioner Muhammad Salimullah.

In the draft affidavit, the Centre said there were "contemporaneous inputs" received by it that indicated links of some of the unauthorised Rohingya immigrants with Pakistan- and Bangladesh-based terror organisations.

The Centre also said that it was found that there were organised network of agents and touts facilitating illegal migration of Rohingyas in India.

"The continuity of Rohingya immigration and their continued stay in India, apart from being illegal, has serious national security ramification," said the draft.

"It has also been found that many Rohingyas figure in the suspected sinister design of IS (Islamic State terror group)/ other extremist groups, who want to achieve their ulterior motives in India including that of flaring up communal and sectarian violence in the sensitive areas of the country," the Centre's affidavit read.