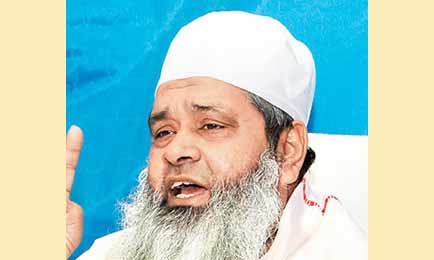 New Delhi: AIUDF President and Lok Sabha MP from Dhubri Badruddin Ajmal on Tuesday said he will request the Supreme Court to direct the authorities to expedite the process for issuing the second list of Assam citizens, after he found his and his kin's names missing from the first list issued on Sunday.

He said his party, the All India United Democratic Front (AIUDF), wants all the Bangladeshis, who came into India illegally after 1971, to be deported.

The Registrar General of India on Sunday night issued the first Draft List of Assam Citizen Register containing 1.9 crore names in accordance with the Supreme Court directions to publish the first draft on or before December 31, 2017.

However, the names of Ajmal, his two sons Abdur Rahman and Abdur Rahim, and his brother Sirajuddin Ajmal are missing from the list.

While Sirajuddin is a Lok Sabha Member from Barpeta, Abdur Rahim is an MLA from Jamunamukh and Abur Rahman is a former MLA.

Besides, names of another 24 prominent persons, including several sitting MLAs and former MLAs of various political parties, are also missing.

The citizen register is being prepared as per the 1985 Assam Peace Accord signed by the Rajiv Gandhi government with the All Assam Students Union (AASU) and the Assam Gana Sangram Parishad.

As per the Accord, the government needed to identify and deport illegal immigrants from Bangladesh and provide constitutional safeguards to indigenous communities of the state.

"The entire process is being monitored by the Supreme Court and we think it is being done impartially. However, if the local officials get biased, it is a different thing. So, we request the apex court to direct the officials concerned to expedite the process for the second list," Ajmal said.

A Muslim man from Kashipur in Assam reportedly hanged himself from a tree on Monday after not finding his name in the first list. Local media reports identified the man as Hanif Khan, aged about 45 years.