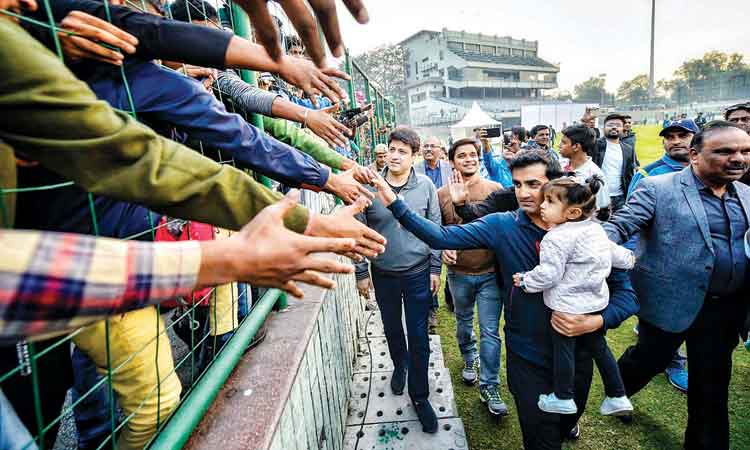 Kumar unveiled the statue of Lord Buddha, the second tallest statue of Buddha in the country, in the presence of Mahabodhi temple's chief monk Bhante Chalinda amid the chanting of hymns, an official release said.

The statue has been installed above a 16 metre radius pedestal in the middle of the lake Ghora Katora and has been made from 45,000 cubic foot pink sand stone, it said.

Kumar took a boat ride in Ghora Katora lake and offered his prayers by circumambulating the Lord Buddha's statue, the release added.

Talking to reporters here, Kumar said that "Ghora Katora lake is a historical place. It is a natural lake surrounded by five hills where Lord Buddha's statue has been installed. People will visit the lake where they can also have the privilege of offering their prayers to Lord Buddha." "A beautiful park is being developed here from tourism point of view...I am quite confident that Ghora Katora will emerge as an important place for eco-tourism...No petrol and diesel vehicles will be allowed to ply here as only electronic vehicles will ply here. People can visit this particular area either on their foot, or by using bi-cycles and tongas," Kumar said.

Stating that this place is associated with all major religions, the CM said that it is said that Guru Nanak Dev had also visited this place.

Some people belonging to Sikh community had expressed their desire for building a "Gurudwara" near "Guru Nanak Shital Kund", he said adding that the Forest department and the Central government have given their clearances for construction of "Gurudwara", the work for which would complete soon.

He expressed hope that the construction of Gurudwara would be completed by the next year near "Guru Nanak Shital Kund".

The CM later inaugurated a three-day Rajgir Mahotsava in the evening.