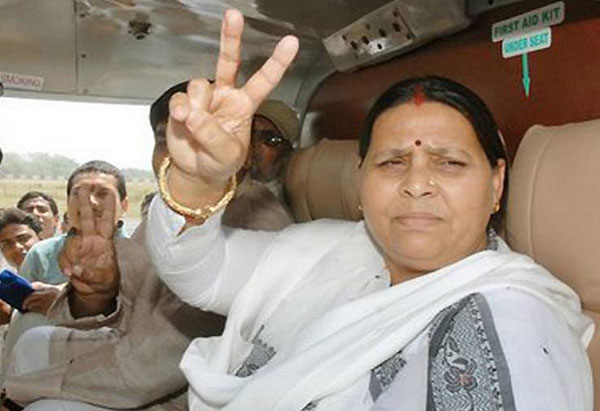 Patna: Former Bihar chief minister Rabri Devi on Friday claimed that poll strategist Prashant Kishor had met her husband Lalu Prasad with the proposal that the RJD and Nitish Kumar's JD(U) merge together and the new entity thus formed declare its "prime ministerial candidate" ahead of the Lok Sabha polls.

If Kishor denies having met Prasad with such a proposal, he is speaking a "blatant lie", she said.

"I got infuriated and asked him to go away as I had no trust left in Bihar chief minister Nitish Kumar following his betrayal," the RJD national vice-president, who is also the leader of the opposition in the legislative council, told a regional news channel here.

Kumar had in 2017 walked out of the Grand Alliance, which was formed upon his party's partnership with the RJD and the Congress. He re-joined the BJP-led NDA.

"All our staff and security personnel deployed here are witnesses. He called on us at least five times, mostly here (her 10, Circular Road residence), and one or two times at paanch number (5, Deshratna Marg - the bungalow allotted to her younger son Tejashwi Yadav)," Rabri Devi said.

"Kishor was sent by Nitish Kumar with the proposal - 'let us merge both parties and declare a prime ministerial candidate'. He came in broad daylight and not clandestinely in the dark of night," she asserted.

Expressing displeasure over Kumar's claim that the RJD supremo keeps talking to Kishor from jail, she said, "Even we, (family members), do not get an opportunity for a telephonic talk with him (Lalu Prasad). And what about the claim by Anant Singh that while he was in jail, Lalan Singh (minister) used to arrange his telephonic talks with Nitish".

A mafia don-turned-politician who represents Mokama assembly segment, Anant Singh was earlier considered close to the Bihar chief minister, but fell out with him prior to the 2015 assembly polls.

His wife Neelam Devi is contesting the Lok Sabha polls as a Congress candidate from Munger, where she is pitted against JD(U)'s Lalan Singh - a state minister and close aide of the chief minister.

Anant Singh made the claim in a recent interview to a local news portal.

Notably, in his recently-published autobiography, Prasad had claimed that Kishor - now the JD(U) national vice-president - had met him as an emissary of Nitish Kumar with the proposal that the chief minister's party be re-inducted into the Grand Alliance.

Kishor, who became a full-time member of the JD(U) in September last year, took to Twitter admitting that he had met Prasad "many times" before joining the party, but added, "If I were to tell what all was discussed, he (Lalu) would be quite embarrassed".