Millions vote in second round of general elections 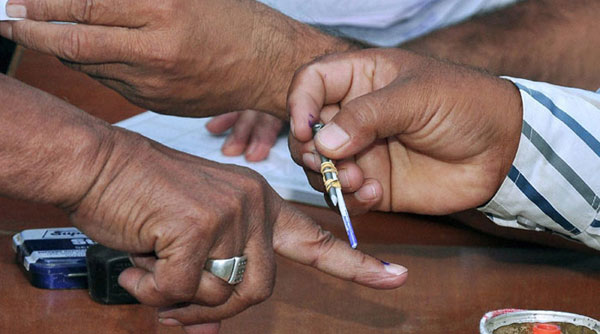 New Delhi: Millions voted across 95 Lok Sabha seats in 12 states and Puducherry on Thursday in the second phase of the staggered battle for a new Parliament, marred by stray violence in West Bengal and muted polling in Srinagar.

CPI-M MP and candidate Mohd Salim was attacked allegedly by Trinamool Congress activists in Raiganj constituency where he is seeking re-election when he went to a polling booth to check reports of vote rigging, officials said.

The Bharatiya Janata Party (BJP) also accused the Trinamool Congress of unleashing violence on its opponents, a charge denied by the ruling party in West Bengal.

A total of 15.7 crore electorate can pick 95 Lok Sabha members out of 1,606 contestants on Thursday.

Stone pelters targeted a polling station in Srinagar city, injuring a policeman. Most Srinagar polling booths reported sparse polling following a call from separatists to boycott the nationwide seven-phase polls that will end on May 19 and whose outcome will be known on May 23.

Polling in all other places was reportedly peaceful although complaints of glitches in electronic voting machines (EVMs) came from several states, briefly halting the electoral process.

Unfazed by the summer heat and dust, voters turned out in large numbers in Karnataka. There was nearly 40 per cent polling between 7 a.m. and 3 p.m. spread across 14 parliamentary constituencies, the main fight between the ruling Congress-JD-S alliance and the BJP.

Polling was also brisk in Tamil Nadu where people will be electing 38 of 39 Lok Sabha members -- voting in Vellore has been postponed -- and 18 members to the state Assembly.

Tamil Nadu, where the main contest is between the coalitions led by the AIADMK and the DMK, too reported nearly 40 per cent voting till 1 p.m. Puducherry voted for its lone Lok Sabha seat.

After initial dull moments, the voting picked up dramatically in Odisha, which is electing five Lok Sabha and 35 Assembly members.

The ruling Biju Janata Dal (BJD) said it was confident of retaining power but the BJP said it was looking forward to a victory.

In Bihar, 32 per cent voting was reported till 1 p.m. in five of 40 Lok Sabha seats. But people in about a dozen villages in all five constituencies boycotted the elections to protest against lack of development.

While brisk voting was reported in the Udhampur Lok Sabha seat in Jammu and Kashmir, with over 32 per cent polling in just five hours, polling in Srinagar was muted.

A police constable was injured in stone pelting by youths trying to disrupt the election in Chrar-e-Sharief in Badgam district, which falls in the Srinagar Lok Sabha seat.

Despite several incidents of violence including an attack on CPI-M's Salim and the smashing of an EVM, Bengal registered over 51 per cent polling in the three northern constituencies of Jalpaiguri, Raiganj and Darjeeling.

After a dull start, voting zoomed in Maharashtra which will elect 10 of the 48 Lok Sabha members on Thursday.

Voting also took place on Thursday in Chhattisgarh and Manipur.