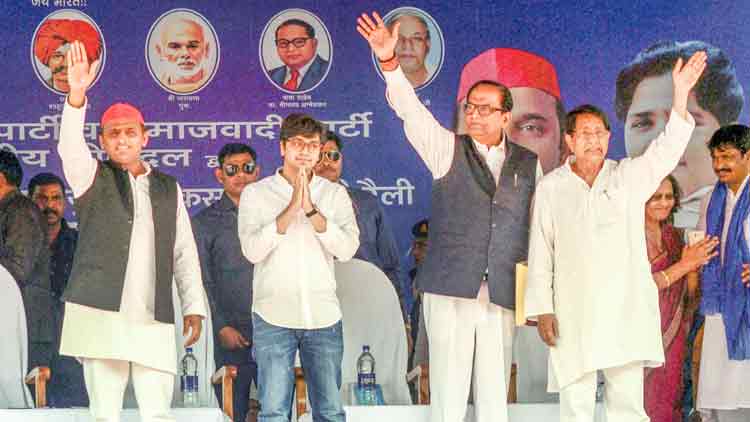 Deoband (UP): Accusing the BJP-led NDA government of creating more rifts in the society than the British during colonial rule, Samajwadi Party chief Akhilesh Yadav Sunday said this time, the Lok Sabha elections are to bring a "mahaparivartan".

Kicking off a joint campaign of the SP-BSP-RLD alliance here in western Uttar Pradesh, Yadav asked the BJP leaders to resolve not to lie during the auspicious occasion of 'Navaratri'.

Referring to the 2014 parliamentary election, the Samajwadi Party chief said, "He (Modi) came as a chaiwala (tea-seller) and we all believed (him) for the sake of 'achche din' and crores of jobs. But now, when elections have come again they say they are chowkidar (watchmen)."

"This time, we all will together snatch the 'chowki' (seat) of every single chowkidar," he said.

Referring to Prime Minister Narendra Modi coining an acronym 'SARAB' (alcohol) from the initial letters of the Samajwadi Party, Rashtriya Lok Dal and Bahujan Samaj Party tie-up, Yadav said, "Our alliance is being termed 'milawat (adulterated) alliance', but those who talk about SARAB are intoxicated by power."

He accused the BJP of having forgotten its promises and asserted that the SP-BSP-RLD alliance aims to give the country a new government and a new prime minister.

The Samajwadi party chief stressed that the dreams of socialist thinkers Ram Manohar Lohia and Kanshi Ram will be fulfilled by the alliance.

"The coming election is for 'mahaparivartan' (grand change)... this is the alliance of giving a new government and a new PM," he told the gathering.

On the prime minister washing the feet of sanitation workers at the Kumbh Mela in Allahabad, the SP president said, "Everyone saw on TV when feet were being washed, but at the same time, jobs of the minorities and others were washed off."

The promise of 'achche din' (good days) has turned out to be 'burey din' (bad days). They (BJP)... brought GST, which benefitted big businessmen but the small ones remained harassed, he alleged.

Taking a dig at the prime minister for making claims of all-round success, Yadav said, "The prime minister is making claims, but statistics prove the country is going backwards in all areas... They created walls within society, when what was required was that progress be made with the help of schemes."

He asked the BJP leaders to resolve never to tell lies, and said, "I have taken the same resolve this 'Navaratri'."

"They created more rifts in society than the British," Yadav said, and alleged that the BJP wanted to create rift within the society and end the legacy of former prime minister Chaudhary Charan Singh.

Lamenting that the country's boundaries were "still not safe" and jawans were being killed, the SP chief held the BJP responsible for these.

"The coming elections are for bringing change, establishing brotherhood, pulling down the wall of hatred," he said.

Asserting that the ruling BJP was afraid of the alliance, Yadav said not a single vote should go in waste and also attacked the Congress for fielding candidates against the alliance.

"The policies of the Congress and the BJP are same... The Congress does not want to bring change but rather want to strengthen itself in Uttar Pradesh," he alleged.

Lauding the works done by the SP and BSP governments in the state in the areas of road, power, laptop distribution, pension, Yadav said, "Those making tall claims on the power sector must know that the BSP and SP governments had done more work compared to the five years of BJP at the Centre and two years in Uttar Pradesh. Not a single megawatt power has been generated by the BJP."