State legislatures, including Kerala, has no power on CAA: Ravi Shankar Prasad 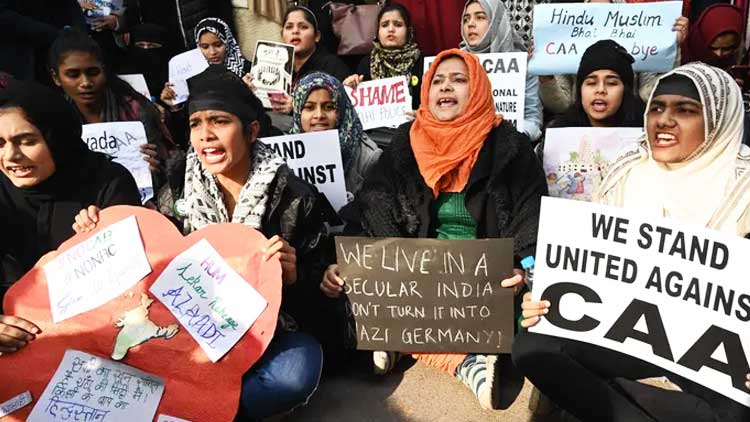 Protesters take part in a demonstration against India'

Thiruvananthapuram: Union Law Minister Ravi Shankar Prasad on Tuesday said the Parliament alone has got powers to pass any law regarding citizenship and not a state legislatures, "including Kerala assembly."

His assertion came hours after the Kerala Assembly passed a resolution seeking scrapping of the Citizenship (Amendment) Act, which provides Indian nationality to persecuted minorities from Pakistan, Afghanistan and Bangladesh.

"It is only the Parliament which has got the powers to pass any law with regard to citizenship; not any assembly, including Kerala Assembly," he told a press conference here.

Prasad said the CAA did not relate to Indian citizens and that it neither creates nor takes away citizenship.

Recalling that late Prime Ministers Indira Gandhi and Rajiv Gandhi had provided citizenship to minorities from Uganda and Sri Lankan Tamils, respectively, he wondered why was it ok if Congress did so and "it is a problem" when Prime Minister Narendra Modi or Home Minister Amit Shah did the same.

"This is double standards and hypocrisy of the worst order," he said strongly defending the CAA which has triggered protests across the country in the past weeks.

The CAA "does not relate to any Indian citizens.It neither creates citizenship nor takes away citizenship of Indians. It is only applicable to persecuted minorities (from the three countries)," the Minister added.

CAA was perfectly Constitutional and legal, he said, adding a 'disinformation campaign' was being done against it by vested interests.

On the National Population Register, which has also come in for opposition from several quarters, including Kerala government, he said it is a compendium of the usual residents of India and it has got nothing to with citizens.

It was about usual Indian residents in a village or town and it has got nothing to do with citizens.

The Population Register data is used for development and policy making purposes by both the Central and State governments, he said.