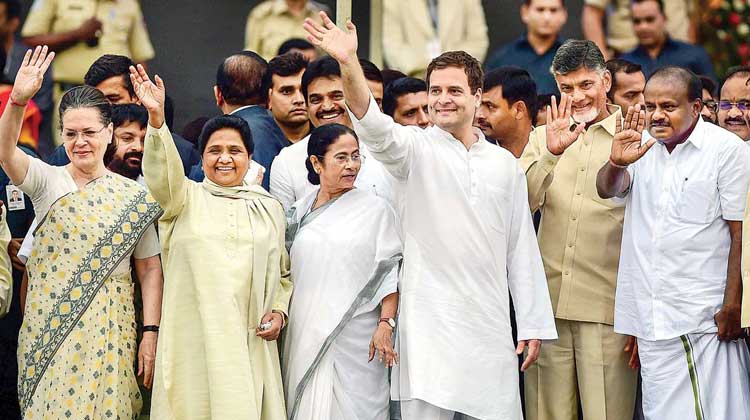 New Delhi: Notwithstanding the bonhomie of the opposition parties and talk of a pre-poll grand alliance gaining ground, it appears unlikely the Congress will be able to forge tie-ups with the ruling parties in non-BJP states particularly West Bengal, Delhi, Andhra Pradesh and Kerala in the Lok Sabha polls.

Bengal's ruling Trinamool Congress, Delhi's Aam Aadmi Party (AAP), Andhra's Telugu Desam Party (TDP) and the Left from Kerala have all shared the stage with the Congress from time to time as part of opposition's show of strength against the BJP.

But when it comes to electoral understandings in the respective states, the Congress as well as the party in power in those states appear to develop cold feet.

After the latest meeting of the opposition parties in the national capital on Wednesday, Trinamool supremo Mamata Banerjee announced that the parties have agreed to a pre-poll pact and a common minimum programme (CMP) to defeat the BJP.

However, the Congress and the Left, which are all set for a tie-up in Bengal, have taken Banerjee's assertions with a "pinch of salt" and insist that even if a pre-poll alliance materialised, the Trinamool will continue to be the main rival for both the parties in Bengal.

"Aligning with the Trinamool in Bengal will be a disaster and completely unacceptable from the leaders down to the last party worker - and most importantly, voters," a state Congress leader told IANS pointing to "sustained attacks" on party workers and supporters by the state's ruling party.

Speaking in the same vein, a Communist Party of India-Marxist (CPI-M) leader said any truck with the Trinamool will lead to the Left losing even its core voters. "How can we expect to ally with the Trinamool, which has unleashed all the means to completely wipe out the Left from Bengal," asked the leader.

The Trinamool, on the other hand, asserts that any tie-up with the Congress or any other party will only be a hindrance to its ambition of a clean sweep in the eastern state, which sends 42 members to the Lok Sabha.

"Why should we go for any arrangement - whether declared or tacit - when we can win all the 42 seats? The more seats we have, the more will be our bargaining power when it comes to forming the government. We don't want to jeopardise our chances," a Trinamool leader said.

In stark contrast to their "friendship" in Bengal, the Congress and the Left continue to be sworn enemies in Kerala, where the Left Democratic Front (LDF) and United Democratic Front (UDF) are the principal players. Both the camps have ruled out the possibility of any kind of understanding in the state, where the BJP is trying to make inroads, especially with the Sabarimala issue giving it some leverage.

A similar situation prevailed during the 2016 Assembly polls when the Congress and Left had tied-up in Bengal but fought a bitter battle in Kerala.

Campaigning for the BJP, Prime Minister Narendra Modi, as well as BJP chief Amit Shah, then had derided the Left and the Congress for their "dosti" (friendship) in Bengal and "kusthi" (wrestling) in Kerala.

"The question does not arise," was the terse reply of a Kerala CPI-M leader when asked about the possibility of an understanding with the Congress.

Even for its tie-up with Congress in Bengal, there was opposition within the CPI-M but party General Secretary Sitaram Yechury, a votary of the tie up both in 2016 and now, is said to have prevailed.

Similarly in Andhra Pradesh, a Congress-TDP truck appears to be unlikely because of the strong anti-Congress sentiment stemming from the division of the state effected during the UPA-II regime.

Despite intense campaigning, the TDP-Congress combine performed miserably in the Telangana polls, winning just 21 out of the 119 assembly seats as the ruling Telangana Rashtra Samithi (TRS) retained power with a huge mandate.

Even as the camaraderie between Congress President Rahul Gandhi and TDP chief N. Chandrababu Naidu is palpable and both have been harping on opposition unity, the parties at the state level are not inclined towards working jointly.

"The political landscape in Andhra is different to that of Telangana. A similar arrangement in Andhra will be counterproductive as TDP is considered to be our arch-rival and opposing them is ingrained in our party cadres and voters," a Congress leader said.

In Delhi, where the Congress-AAP rivalry has only got more serious, the possibility of any arrangement is far-fetched for both the parties.

In fact, Gandhi, post the Wednesday's opposition parties meet which Delhi Chief Minister Arvind Kejriwal also attended, made evident the Congress' being non-committal to aligning with the AAP. He said that no decision was taken on the alliance with the AAP in Delhi and the Trinamool in Bengal.

However, Kejriwal, while claiming that the Congress has "almost said no" to an alliance, also insisted on the need for jointly fighting the BJP. Throughout the country, there should be only one candidate against the BJP in every constituency as a third candidate would eat into anti-BJP votes, benefiting the ruling party, he said.

However, a section of the party believes any arrangement with the Congress will erode its core vote base and insist that retaining Delhi in the assembly polls was far more important.

Speculation, though, persists about a possible electoral alliance between the Congress and the AAP both of which drew a blank in 2015 with the BJP sweeping all the 7 seats in Delhi.