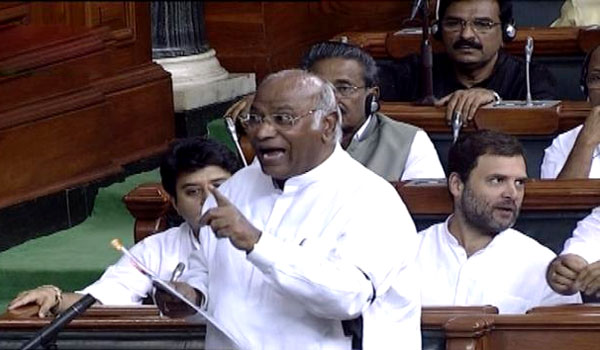 New Delhi: Congress leader Mallikarjun Kharge on Thursday accused the government of using the President's address to the joint session of Parliament for political "gains" and dubbed it a compilation of Prime Minister Narendra Modi's speeches in rallies.

Speaking in the Lok Sabha on the motion of thanks to the President's address, Kharge criticised the government's actions like demonestisation, GST implementation and the Rafale fighter jet deal and said that the BJP came to power in 2014 by "misleading the people which it is still continuing".

He alleged that the government was not only weakening Constitutional institutions but trying to finish them day after day.

Kharge said that even as the Bill was taken up in the Lok Sabha for discussion and passing in an unstarred reply in Paliament, the Minister concerned had denied that the government has any proposal to provide reservation for the poor among upper castes.

He said that it pained him when the President, in his address, compared the work done by the Modi government and the previous governments.

"At least give us the credit for our work. But you won't give us credit because you are full of hatred. Despite our doing so much work, you allege every now and then that nothing has happened in last 60 years," the Congress leader said.

He listed the Congress's achievements in the form of reducing illiteracy and infant mortality rate while it took several measures like green revolution, establishing educational institutions and many other pioneering measures.

Kharge said the Congress governments in the past had done everything to save the country and the democracy while the BJP-led government has been misleading the youth.

"We developed this country as self-dependent, competent and one with self respect. We strengthened the democracy and saved the country. You came in power by making false promises but you did not stop here. You are continuously lying. Because it has been in your habit," he said.

Referring to issues of demonestisation and the GST, Kharge slammed the government saying the two decisions broke the back of the farmers, labourers and the small and medium businessmen.

He also raised the issue of Rafale fighter jet deal and demanded a joint parliamentary probe into it.

Hitting out at government over the farmers' plight across the country, he said it did nothing for the farmers in the last five years.

"Why are you not writing off the farmers' loans when you can waive Rs 1.10 lakh crore of loans of industrialists. You did nothing for the farmers. You did not even implement the promises for them. Now, when you are going to face elections, you are trying to give them something. But this is not going to work," he said.