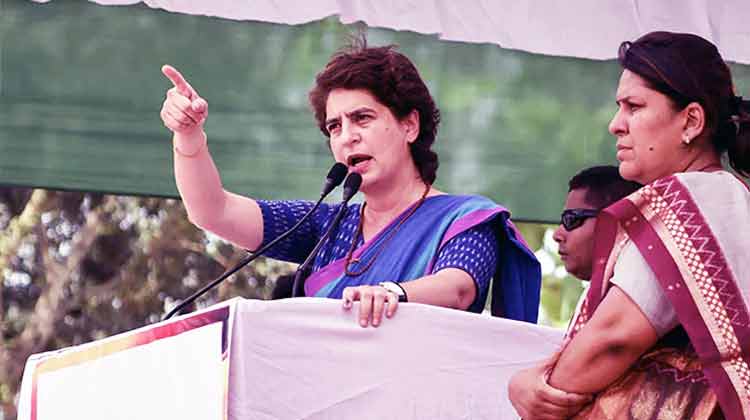 Lucknow: If the Congress hopes to regain lost ground in Uttar Pradesh by bringing Priyanka Gandhi into active politics, political adversaries claim she will have no impact on the crucial state ahead of the Lok Sabha polls.

Her appointment Wednesday as Congress general secretary for Uttar Pradesh East was dubbed a non-starter by the state BJP head Mahendra Pandey.

"There is not even a one per cent challenge,” Pandey said. “This only proves that the Congress cannot rise above the family."

Siddharth Nath Singh, spokesperson for the Yogi Adityanath government in the state, said the appointment is an admission that in the Gandhi family “the dependence on Rahul is over".

"This also means that Rahul Gandhi's fall is the rise of Priyanka Gandhi in Congress," he said.
Opposition leaders said Priyanka Gandhi has to prove her mettle at the organisational level as she has so far remained confined to the twin constituencies of Amethi and Rae Bareli, represented by her brother and mother.

Samajwadi Party leader Juhie Singh reacted cautiously to the development. "Purvanchal has a lot of importance in politics and Priyanka's appointment as in-charge of this region goes on to prove that it is being taken seriously by the Congress leadership," she said.

"We congratulate her. Our party has always been striving to bring more women and youth in politics and this is another step in this regard," she said.

The Samajwadi Party had earlier announced an alliance with the Bahujan Samaj Party in the state, shunting the Congress out of the pre-elections pact.

But the two parties have also said they will not put up candidates in Amethi and Rae Bareli.
Congress workers here speculated that Priyanka Gandhi may contest the coming polls from her mother Sonia Gandhi's Rae Bareli constituency.

Party spokesperson Rajiv Bakshi said her appointment will give the party a chance to "strike back" in the state.

But Lucknow-based political analyst Surendra Dwivedi said Priyanka Gandhi is yet to to prove herself, adding there were a lot expectations from her in the Congress.
"The Congress wants to bank on Priyanka's similarities with Indira Gandhi but she died in 1984, and the youth today does not have any empathy with the former prime minister," an analyst said.

But he added that Priyanka Gandhi is a “good campaigner” and strikes a rapport with the people.
Another analyst Parvez Ahmed suggested her appointment will help the Congress deal with the SP-BSP alliance that many believe was struck with caste equations in mind. She provided them an alternative, he said.

In the Congress circles here, the appointment is being seen as a masterstroke that will infuse energy in party workers in a state where its influence has been waning over the years.

"This is an opportunity for the Congress to strike back in the most crucial state of the country where the organisation had all through been wanting her to plunge into active politics," Uttar Pradesh Congress Committee spokesperson Rajiv Bakshi told PTI.

Winning Uttar Pradesh, which sends 80 MPs to the Lok Sabha, is vital for any party that plans to capture power at the Centre.