IAF aircraft goes missing with 13 on board 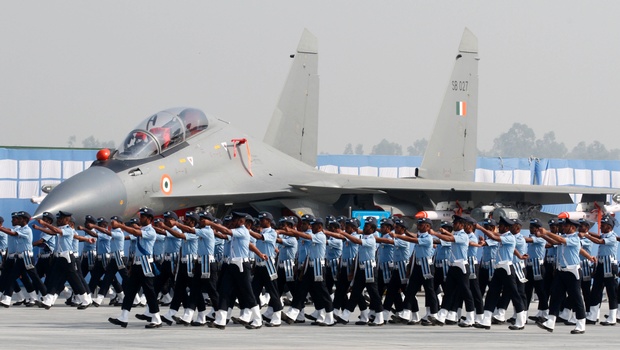 Itanagar/Guwahati: An Indian Air Force (IAF) An-32 transporter with 13 people on board went missing while flying from Assam to Arunachal Pradesh on Monday but there was no trace of the plane despite many hours of search.

The aircraft took off from Jorhat in Assam to the Mechuka Advanced Landing Ground. Mechuka is a small town in Aruanchal's West Siang district bordering China.

Within 35 minutes of the An-32 getting airborne at 12.25 p.m., it lost contact with ground staff. Since then, there has been no contact with the plane or any of the eight crew members or five others who were on board.

More than seven hours after it disappeared from the radar, there was no trace of the An-32.

Wing Commander Ratnakar Singh, the IAF spokesperson of Eastern Air Command, told IANS: "Efforts are on to establish the whereabouts of the aircraft. C-130J, AN-32 and Mi-17 of IAF and Indian Army ALH helicopter are trying to locate the missing aircraft."

He said: "Some reports of possible location of crash site were received but no wreckage has been sighted so far."

The IAF is coordinating with the Indian Army, the Indo-Tibetan Border Police (ITBP) and civil agencies to trace the missing aircraft.

The search operations will continue from air and on ground throughout the night, officials said.

"He has apprised me of the steps taken by the IAF to find the missing aircraft. I pray for the safety of all passengers on board," the Minister tweeted.

Arunachal Pradesh Chief Minister Pema Khandu tweeted: "Praying for safety of all 13 persons who were on board."

The Deputy Commissioner of newly-created Shi Yomi district in Arunachal, Mito Dirchi, said there were some reports of a crash in the jungles of the district.

"We have sent a team for search which includes SP and some villagers. But we have not found any wreckage. We are going to search the areas tomorrow morning again."