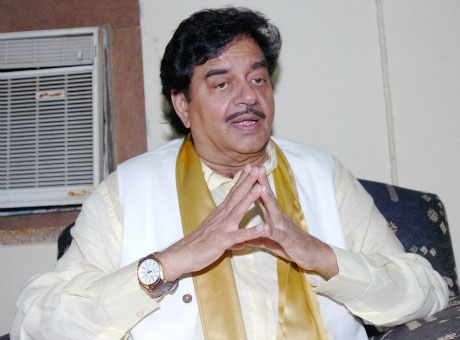 Patna: With his exit from the BJP appearing imminent, disgruntled leader Shatrughan Sinha on Thursday launched a stinging attack on Prime Minister Narendra Modi, saying it was high time that "a new, better leadership" took over.

The Patna Sahib MP, who is expected to announce his next political destination, predictably in the opposition 'Mahagathbandhan' next week, came out with a flurry of tweets flaying Modi for not having held a single press conference in his five-year-long tenure and urged him to "come out with all your black, white and grey shades".

"Now that dates have been announced, Sir, ab toh kum se kum ek press conference kar dijiye. A free and fair session, not choreographed, researched or rehearsed and without the press known for Raag Darbari and Sarkari mindset. You shall go down in history as the only PM in a democratic world who has not had a single Q and A session during his tenure," Sinha tweeted.

"Dont you think it is high time and the right time, before the government changes, that a new, better leadership takes over. And you should come out with all your black, white and grey sides," he said in another tweet.

The actor-turned-politician also attacked the PM for having "announced 150 projects in UP, Benares and other parts of the country in the last week/month of your term".

"Technically speaking it may not be against the code of conduct, but certainly it seems to be too little and too late jumlas. Still, wishing you all the best in spite of your looking London and talking Tokyo attitude and your shoot and scoot behavior. Jai Hindi," Sinha said in his final tweet.

Having been with the BJP since the 1990s, Sinha had served as a minister in the Atal Bihari Vajpayee government and is serving his second consecutive term as MP from Patna Sahib.

He has been sore over being sidelined in the party, which he has repeatedly described as "one man army and two-man show", a reference to Modi and his confidant Amit Shah-BJP president.

Having shared the stage with opposition leaders of all hues, Sinha insists that "location will be the same, situation may be different" implying that he will seek re-election from Patna Sahib albeit as candidate of a different party.

Sinha, who is likely to be fielded by the Congress or the RJD, has indicated that the same would be announced by March 22.

The BJP is yet to announce its candidate for Patna Sahib.

Negotiations are on with its ally, the JD(U), as the party headed by Bihar Chief Minister Nitish Kumar is reportedly keen on contesting at least one of the two seats in Patna district. In 2014, the BJP's Ram Kripal Yadav had won Pataliputra defeating JD(U)'s Ranjan Yadav.