Congress may include Healthcare Act promise in manifesto 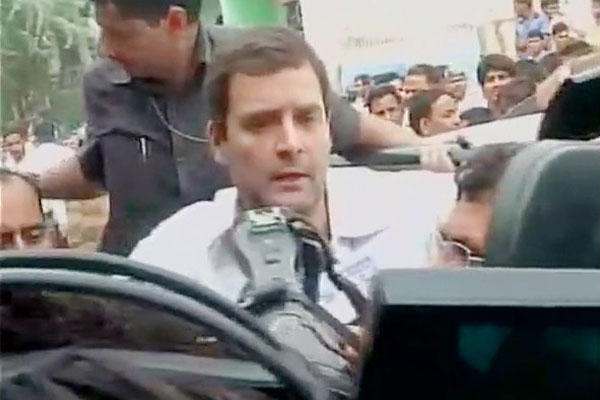 Raipur: Congress President Rahul Gandhi on Friday said his party is considering inclusion of a Right to Healthcare Act promise in its manifesto for the ensuing Lok Sabha election to guarantee minimum healthcare to all.

Gandhi also criticised the Ayushman Bharat flagship health scheme of Prime Minister Narendra Modi's government and termed the programme as a handout to 15-20 select businessmen of the country.

He was interacting with medical professionals during the concluding session of the two day national convention on Health for all organised by an NGO here.

"In our manifesto, we are considering three things: Including Right to Healthcare Act by which we can guarantee a certain minimum healthcare to all Indians; increasing our healthcare expenditure to 3 per cent of the GDP and increasing the number of doctors and healthcare professionals, Gandhi said answering a question from the professionals.

Gandhi also asserted that if his party is elected to power in the 2019 general elections, its focus will be on increasing expenditure on healthcare and education.

"India is transitioning from a rural system to urban system. There is a massive shifting taking place and it is a painful shift. It is not an easy shift, it is a traumatic shift," he said.

Gandhi said there are three things that any government in the 21st century has to do to protect Indias citizens.

"First we have to fix unemployment problem and second is we have to give low cost high-quality education. The third thing is that we have to ensure better healthcare system, he said.

"These to me are non-negotiable things. If we dont do all of these, we are not going to be successful, he added.

Gandhi said the biggest cause of falling back into poverty is healthcare. "Everybody knows that. Healthcare in the sense is foundation. We have to ensure that this foundation is built firmly. A Congress government in 2019 is dramatically going to increase the amount of money in healthcare and education, he said.

We are not going to put money in waste that allows limited number of people to make massive amount of money, he said.

He said that is how he views the Ayushman Bharat scheme. "I see it as a limited scheme that is targeting very limited number of healthcare issues. If I want to be frank it is a handout to the 15-20 richest businessmen in India. That is not the type of scheme we are going to put in, he said.

"My main criticism of the Ayushman Bharat scheme is that it gives insurance without proper support structure from hospital and medical professionals. Without the capacity to deliver the medical care, no insurance system can function", he said.

"You need public expenditure in healthcare and in education. Of course there is a role for private institutions, for big business and for insurance. There is a role even for private programme providers of healthcare but the foundation in my view has to be government and public sectors, he added.

Gandhi said he was committed to taking the expenditure on education to 5 to 6 per cent of the GDP.

Gandhi attributed the 'dramatic failure' on education and healthcare front to the disparity in the way the BJP and RSS think about development.

"I view healthcare provision as something that is done by large number of stakeholders - ASHA workers, doctors and other medical professionals, businessmen etc. My approach is that each stakeholder should have a role to play, Gandhi said.