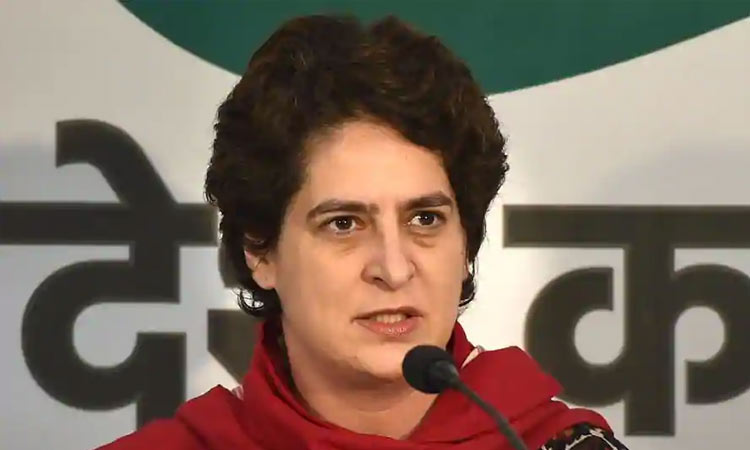 Lucknow: After making a political buzz through a successful roadshow in the state capital last month, Congress general secretary Priyanka Gandhi Vadra appears all set to explore a new means of reaching out to the electorate -- the river route.

"It would be the first time that any leader of this stature will be reaching out to the electorate using the river route in a motorboat, getting first-hand account of the people residing in these remote riverine areas," Congress spokesman Dwijendra Tripathi told PTI.

Priyanka is all set to formally kick off campaigning for the Lok Sabha polls from the political hotbed of eastern Uttar Pradesh, Prayagraj and Varanasi, using the river route this Monday.

This will provide her an opportunity to interact the commoners and know their problems, the biggest of which is caused by recurring floods in these areas as well as the reality of Ganga cleaning, which was first launched by former prime minister Rajiv Gandhi, Dwijendra Tripathi said.

Another Congress spokesman Anshu Tripathi said, "These villages and people have been living on the fringes since long and have been neglected by successive state governments in the last 30 years. This is an attempt by the Congress leadership to let them know its sincerity for all sections of people, including the neglected ones." Priyanka, 47, who was recently appointed Congress general secretary incharge of eastern UP, will cover a distance of about 110 to 112 km touching Prayagraj, Bhadohi, Mirzapur and Varanasi.

Reaching the villages by river, she will use the narrow broken trail taken by the locals to interact with as many people as possible, Awasthi said, adding that a detailed programme is being worked out.

Political analyst Ramesh Dixit, while admitting that he did not remember any leader using the river route for campaigning, said this was only aimed at giving it a different look.

"The target is to reach out to the Mallah, Kewat and Nishad communities of boatmen, fishermen and agriculturalists living along the river...but to know about the difficulties faced by them, it does not require one to be a diver...this is just aimed at making the campaign look different," said Dixit, a retired head of the political science department of Lucknow University.

Priyanka's plans for the first phase of her campaign was stated in a letter submitted to the Election Commission and permission has been sought for her visit from Prayagraj to Varanasi from March 18 to March 20.

The letter also informs that Priyanka will use a motorboat to cover the distance of around 100 km and programmes to welcome her have been scheduled for which permission was required in compliance with the Model Code of Conduct.

Priyanka is likely to arrive in the state capital on March 17 and move to Prayagraj for her campaign the next day. There she is expected to visit the historic Anand Bhawan, the erstwhile official residence of the Nehru family, now dedicated as a museum housing the personal belongings of Jawaharlal Nehru and his father Motilal Nehru.