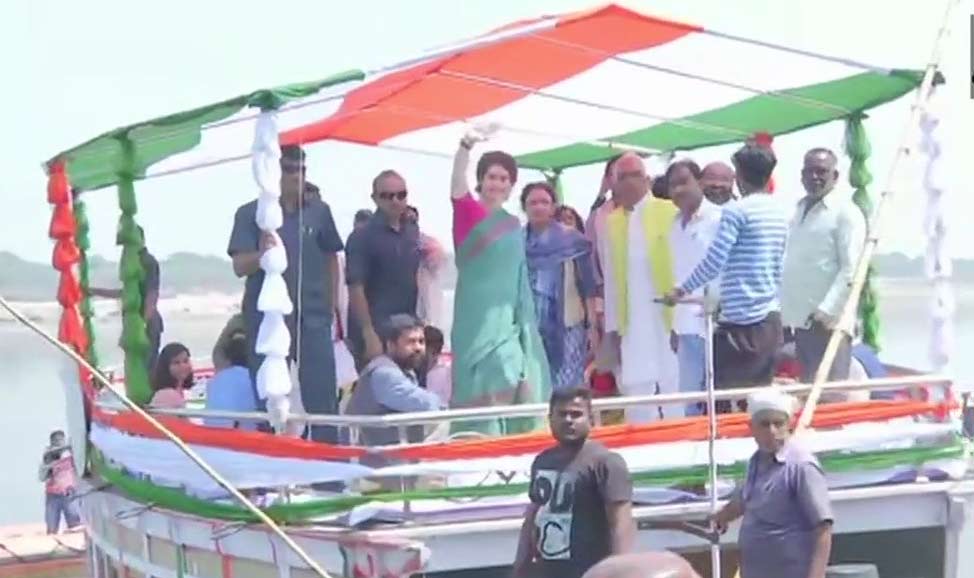 Prayagraj: With less than a month to go for the 2019 Lok Sabha elections, Congress General Secretary Priyanka Gandhi Vadra on Monday kicked off her three-day long river ride poll campaign from here, describing the Ganga as "large-hearted".

The party's eastern Uttar Pradesh in-charge is banking on the sympathetic and generous nature of the people who live on the river banks to vote for her party.

As the boat sailed along slowly, Priyanka Gandhi connected with the people waving out at her. With a microphone in hand, the 47-year-old, shouted out to them, asking the crowd about their well-being.

Most of those gathered on the banks are from the boating communities -- Nishad and Mallaah.

Gandhi started her day as she left Swaraj Bhawan, her ancestral home, and arrived at the Bade Hanuman Mandir, popular as 'Lete huye Hanuman Mandir' near Prayagraj Sangam.

She offered prayers at the temple, as well as to the river Ganga.

She then embarked on her much anticipated boat ride from the Manaiya Ghat in Kachnar tehsil of Prayagraj district, according to party leaders.

She was welcomed by party supporters who showered flowers on her.

After arriving at Manaiya ghat, Priyanka Gandhi broke her security protocol and breached the barricades to shake hands with party supporters, who had arrived from different parts of the state.

The younger sibling of Congress President Rahul Gandhi interacted with girl students as part of her campaign "Sanchi baat" soon after her boat left Manaiya ghat.

About 20-25 girls were riding along with her on the boat specially prepared for the campaign.

Many leaders have demanded that Priyanka Gandhi contest from the Phulpur parliamentary constituency seat, which was represented by her great grandfather Pandit Jawaharlal Nehru.

Ashsih Kumar Srivastava, a Congress supporter from Chitrakootdham said: "We want her to lead the party. And we demand that she must contest from Phulpur seat, which was represented by Nehruji."

Beside Srivastava, Sudhir Dwivedi, a resident of Bahadurpur, situated opposite the Manaiya ghat, said: "After the arrival of Priyanka Gandhi there is a definite wave for the party here in the state."

With her river ride she will also raise the issue of pollution destroying the river.

Pointing towards the river, he said, "You can clearly see that Ganga has not been cleaned and thus the river mother has called upon her daughter."

On the first day of her three-day river ride from Prayagraj to the parliamentary constituency of Prime Minister Narendra Modi, she will cover the distance up to Sitamarhi ghat in Bhadohi district.

On her way from Manaiya to Sitamarhi, she will make her first pit stop at Dumduma ghat and interact with the villagers.

After leaving Dumduma ghat, the Congress leader will reach Sirsa ghat and then the Lakshagrih ghat.

She was expected to arrive at Sitamarhi ghat by evening.

On Sunday, she held marathon meetings with party workers at the Nehru Bhawan party's state headquarters in Lucknow. Congress had won only two seats from the state in 2014.

Scores of Congress supporters had arrived at the ghat since dawn to get a glimpse of their leader.