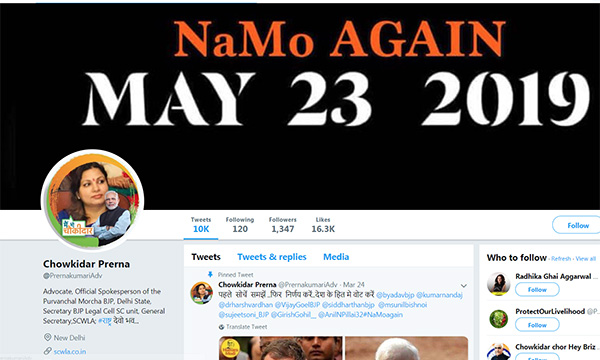 New Delhi: After a controversy broke out over tea on trains being served in cups on which 'Main Bhi Chowkidar was printed, the Railways on Friday said that it was printed on the cups without its permission.

It also underlined that the cups had been withdrawn and a Rs 1 lakh fine imposed on the vendor.

The explanation came after it was pointed out that this was a violation of the Model Code of Conduct during the Lok Sabha elections.

"News reports about tea being served in cups labelled with ‘Main Bhi Chowkidar' have been investigated. This was without any prior approval of the Railways," the Indian Railways Catering and Tourism Corporation (IRCTC) said in an official statement.

"The cups have been withdrawn with immediate effect. It may be noted that only few of these cups were in circulation," it added.

It explained that cups and other such material are used for paid publicity by the licensees as per the agreement.

"The licensees are supposed to take prior permission from IRCTC for printing advertisements. However, in this case no such approval was taken. Rs 1 lakh fine has been imposed on the licensee and a showcause notice has also been served," the statement said.

"These lapses were overlooked by the on-board supervisory staff/pantry in-charges. Explanation has been called for, from the on-board staff for this carelessness," it added.

The Railways' controversy came close on the heels of state-owned Air India giving boarding passes to passengers on which Prime Minister Modi's picture was printed. Air India, too, had to withdraw these passes after a controversy broke out.