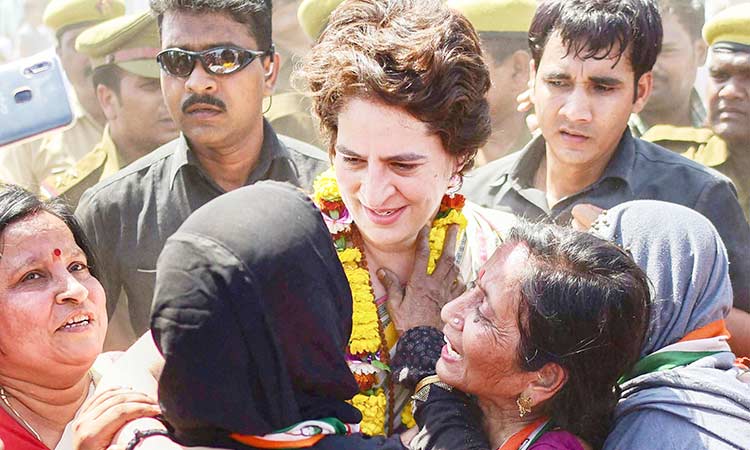 Ayodhya/Rae Bareli: Congress General Secretary Priyanka Gandhi Vadra on Friday hit out at Prime Minister Narendra Modi and said he "only meets and greets the rich" and has no time to meet people from villages.

Priyanka Gandhi said this as she huddled with a group of women under the scorching sun in Uttar Pradesh's Atka village and Naua Kuan in Faziabad district.

Addressing the party workers, the AICC's Uttar Pradesh (East) in-charge said: "I asked people if development happened in your villages and they replied that a 15-km road has been made.

"I asked them when was the road approved and the people said it was approved under the Congress government but 15 km of road has been made for publicity," she said.

The Congress leader then said that when she asked the people if Modiji came to your villages, they replied "not even once in the last five years as he remains busy in doing publicity".

Targeting the Prime Minister over his foreign trips, she said: "He goes to foreign lands and hugs the people there. But he does not hug the poor in India."

The Congress leader also lambasted the Modi government for questioning the Nyuntam Aay Yojana or Nyay (minimum income guarantee scheme) announced by party President Rahul Gandhi and said that the Bharatiya Janata Party (BJP) says they do not have enough money to pay the people.

"The government has waived off the loans of several industrialists but they don't have money for the people of the country.

"This government wants to snatch poor people's employment. But the Congress through Nyay scheme will give Rs 72,000 to each poor family," she said.

The Congress leader then also targeted Modi over his 56-inch chest remark. She said political power is not a tool for publicity but it is for listening and serving the people.

Accusing the BJP of diverting attention from the real issues, she said they talk of "Mai Bhi Chowkidaar", but now the farmers are compelled to save their produce by acting as watchmen.

"They are insulting you. They want to divert your attention. BJP wants to ensure that whatever lie they say should be shown as a full package and people get diverted (from real issues)," she said.

Earlier, at Atka village the Congress leader launched a blistering attack on Modi, two days after his announcement of "Mission Shakti", saying: "If you cannot listen to the voice of your people, then what kind of power do you have?"

Not sparing BJP President Amit Shah, she called the saffron party's 2014 promise of giving Rs 15 lakh to every citizen as "rhetoric".

On Thursday, interacting with party workers in her mother Sonia Gandhi's constituency in Rae Bareli, she had surprised the cadres when responding to a query about contesting from her mother's safe seat, Priyanka Gandhi said: "Why not Varanasi?"

Priyanka Gandhi said it was the Congress which had brought people-friendly schemes like Mahatma Gandhi National Rural Employment Guarantee Act (MGNREGA) to give employment to people across the country.

"When they were in opposition, they opposed the MGNREGA, but as soon as they came to power they realised how good the scheme is," she said.

"These projects have now gone into the hands of contractors," she alleged, adding that now the enrolled people are not getting money for over six months.

Earlier in the day, while on her way from Rae Bareli to Faizabad, Gandhi made brief halted at several places. She met women workers and also paid obeisance at Materva Mazaar in Amethi.

The 47-year-old became nostalgic when a Muslim family reminded her of her grandmother and former Prime Minister Indira Gandhi's visit to the village in the 1980s.

Comparing her party's politics with that of the BJP, Gandhi said: "Their politics is of lie and publicity. It won't work anymore."

She also said that her brother and Congress President Rahul Gandhi has been speaking about the rights of the farmers. She reminded them that he had even gone to Bhatta Parsaul to fight for their rights.

During the day, Priyanka Gandhi will also hold a road show in the temple town of Ayodhya.

Before concluding her three-day poll campaign, she will offer her prayers at Hanumangarhi temple.