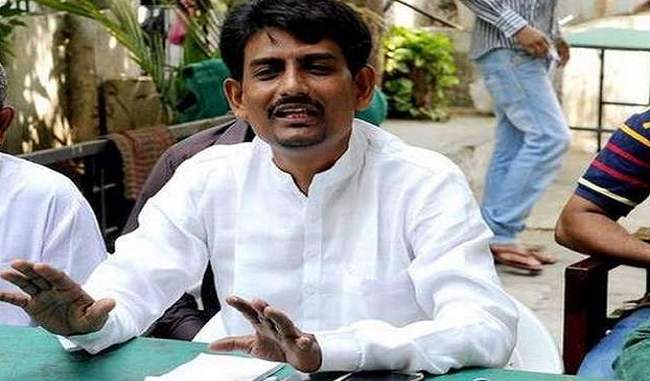 Gandhinagar: The Gujarat Congress suffered a major setback on Friday as two of its legislators resigned from the party with one of them embracing the BJP, even as political circles were agog with speculation that firebrand young OBC MLA Alpesh Thakor might quit anytime and join the ruling party.

This comes just three days ahead of the important March 12 meeting of the Congress Working Committee, the party's highest decision-making arm, in Ahmedabad, to be followed by a rally where general secretary in-charge of Eastern Uttar Pradesh Priyanka Gandhi would make her public address after being ushered in full-time in the party affairs.

A BJP leader taunted the Congress party: "When you seek to play on the front foot, you risk being stumped".

The CWC meeting is being held in Gujarat for the first time after 60 years as a party strategy to take the Lok Sabha battle to the home turf of Prime Minister Narendra Modi and party president Amit Shah.

The Congress' four-time sitting legislator Jawahar Chavda from Manavadar constituency in Saurashtra region, put in his papers and joined the BJP. Hours later another MLA Parshottam Saparia from Dhrangadhara constituency in Surendranagar district, also in Saurashtra, resigned and was likely to join the BJP on Saturday.

Both submitted their resignation as MLA to Assembly Speaker Rajendra Trivedi and later quit the party too.

A four-time Congress MLA and son of party veteran, the late Pethalji Chavda of Junagadh district, Chavda told reporters after joining the BJP: "I had no issues with the Congress party at all, I just thought it for some time and made my decision."

"I thought one must support Prime Minister Narendra Modi in this hour of crisis when he has shown courage to send our armed forces inside Pakistan and teach them a lesson," Chavda added.

He did not give any more reasons for his quitting the party and joining the BJP. Party sources claimed Chavda may be inducted into the Cabinet or given a Lok Sabha ticket to contest from Junagadh seat.

Neither he nor Minister of State for Home Pradeepsinh Jadeja, who ushered in Chavda, confirmed this. "I have no such expectation and there was no bargaining," Chavda said. Jadeja said, "He has just now joined, there is no talk of ministership right now."

Saparia, a first-time legislator, did not disclose any reason for his resignation.

Senior Congress legislator Shailesh Parmar, speaking on behalf of the party, told reporters: "We are shocked at Chavda's resignation since he had never raised any issues nor has he given any reasons for quitting. In fact, he has been given important responsibilities ahead of the CWC (Congress Working Committee) meeting in Ahmedabad (on March 12)."

"The BJP is trying to sabotage the Congress prospects knowing well that the party can never repeat its 2014 performance of winning 26 out of 26 (Lok Sabha) seats. It is playing a dirty game," he added.

There were intense rumours doing the rounds the entire day that at least three more Congress legislators are in touch with the BJP leadership and may quit anytime soon.

This includes OBC leader and young legislator from Radhanpur in North Gujarat Alpesh Thakore, who had joined the Congress in the run-up to the 2017 assembly elections. He contested on a Congress ticket and won.

While Thakore has been denying any such moves, it is known that he has had meetings with Chief Minister Vijay Rupani and state BJP chief Jitubhai Vaghani. Simultaneously, he was also to meet Congress President Rahul Gandhi.

He is among the young trinity of Hardik Patel and Jignesh Mevani. There have been speculations that the BJP may give him a cabinet berth or a Lok Sabha ticket.

There has also been a discussion that while he would be made a minister his wife might be given a Lok Sabha ticket.

Congress spokesperson Ashok Punjabi, however, told IANS on Friday evening: "Alpesh is not going anywhere and is going to stay in Congress. He has had a wonderful meeting with Rahul ji and our central leadership today. He will clarify everything in his press brief on Saturday. You will see."

Thakor could not be reached despite repeated attempts. Congress sources, meanwhile, disclosed that Thakor had been hankering for a Lok Sabha ticket but the Congress high command had not given any commitment so far. He met senior leader Ahmed Patel in New Delhi on Friday though it was not known what transpired in the meeting, while he was also expected to meet party president Rahul Gandhi.

Thakor also had issues with the Gujarat Congress leadership that he was being sidelined in the party and had conveyed that he would decide the future course of action after meeting the AICC chief.