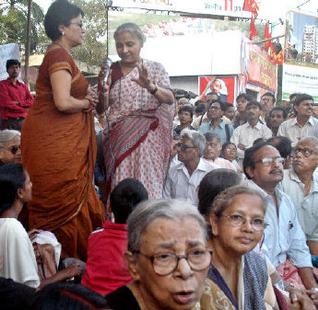 Thane: A family from the Kanjarbhat community in Thane district of Maharashtra has approached the police after it faced social boycott for opposing the practice of virginity test of women, an official said on Thursday.

Based on the family's complaint, the Thane police on Wednesday night booked four persons from Ambernath town here under the Maharashtra Prohibition Of People From Social Boycott (Prevention, Prohibition and Redressal) Act, he said.

The complainant, Vivek Tamaichikar, told the police that his family was facing a boycott by their community's jati (caste) panchayat for the last one year for opposing the custom whereby a newly-wed woman has to prove that she was virgin prior to the marriage.

He alleged that their panchayat instructed all members of the community not be have any association with his family.

"The community members went to such an extent that when my grandmother died on Monday, they did not come for her funeral," Tamaichikar told reporters here on Wednesday.

On the contrary, the same day, the community members participated in a pre-wedding celebration in the locality with loud music while there was a death in his family, he rued.

Tamaichikar said in a progressive society, such boycotts were unwarranted.

Following his complaint, four persons were booked, an official at Ambernath police station said, adding that no arrest was made so far.

Notably, the Maharashtra government in February this year said it will soon make forcing a woman to undergo virginity test a punishable offence.

"Virginity test will be considered a form of sexual assault...after consultations with the law and judiciary department, a circular will be issued declaring it a punishable offence," Maharashtra's Minister of State for Home Ranjeet Patil then said.

The demeaning custom is allegedly followed in the Kanjarbhat community, among others. Some youths from the community have launched an online campaign against it.