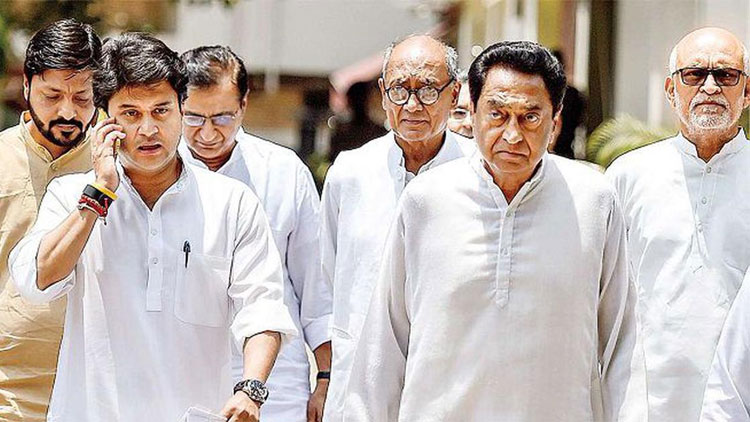 Bhopal: The Congress has rejected the BJP's demand to hold a special session of the state Assembly in Madhya Pradesh to discuss issues of urgent public interest.

Gopal Bhargava, leader of Opposition in the state Assembly, had written to Governor Anandiben Patel demanding a special session of the House to discuss financial issues since no such session has been held for nearly six months.

"I have written to the Governor to convene a special session of Assembly shortly. We want discussions on important issues like farm loan waiver and also want to test the government's strength," Bhargava said.

State Parliamentary Affairs Minister Govind Singh said on Monday that the government will summon the regular budget session shortly and there was no need for a special session.

Singh also countered the BJP's claim that some of the ruling party's MLAs were keen to desert the government, saying the opposition party should take care of its own MLAs who might jump ship to the Congress. The Congress leader said the party had the numbers and didn't need to prove them every week.

Meanwhile, Chief Minister Kamal Nath on Monday asserted that his government had no hesitation in proving its majority.

Attacking the BJP, the Chief Minister said, "They (BJP) are worried that scams during their 15-year rule will now come out. In a bid to conceal these, they want to disturb the present government."

The Congress might hasten the expansion of the Ministry by inducting members from the Bahujan Samaj Party (BSP) and the Samajwadi Party (SP) to neutralise the opposition's challenge. The expansion planned early in March was postponed in view of the model code of conduct put in place for the Lok Sabha elections. BSP's Sanjeev Singh Kushwaha, SP's Rajesh Shukla and Independent MLA Surendra Singh are likely to get berths.

Singh further said that the Congress had already proved its strength on the floor of the state Assembly twice when its candidates won the elections for the Speaker and Deputy Speaker of the House.

BSP supremo Mayawati too had threatened to withdraw support to the Congress government after Lokendra Singh, a BSP Lok Sabha candidate who quit the party and joined the Congress to support Jyotiraditya Scindia. Chief Minister Kamal Nath, however, indicated that the matter was resolved, saying, "Mayawati's party has the same goal as us, which is the exit of the BJP".

BJP's demands reflect a friction between former Madhya Pradesh Chief Minister Shivraj Singh Chouhan and Gopal Bhargava. Bhargava said the BJP was submitting the proof of fulfilling its promises on farm loan waiver to an ex-Chief Minister instead making the documents public through an appropriate forum, causing an anarchical condition.

Ideally, such matters should be taken up in the House. Chouhan tried to upstage the leader of the opposition by rushing to the press to suggest that the Congress was in minority. The BJP was apparently keen to force the issue in view of the exit polls. Bhargava was also upset that Chouhan, now a mere MLA, should assume more importance than the leader of the opposition.

Chouhan, on the other hand, sought to grab the spotlight by saying, "We will not try to dislodge the government, but the Congress is a divided house. They are in minority and even the minority is divided. Senior Congress MP Jyotiraditya Scindia went abroad even before the last phase of polling concluded."

In the Assembly polls held in December 2018, the Congress won 114 of the state's 230 seats when the majority mark was at 116. It then got the support of two MLAs from the BSP and one from the SP. Two Independent MLAs are also backing the government. The BJP had won 109 seats.

Exit polls have predicted a victory for the NDA in the Lok Sabha elections. An aggregate of exit polls has also predicted that the BJP will win 24 of the 29 Lok Sabha seats in Madhya Pradesh.