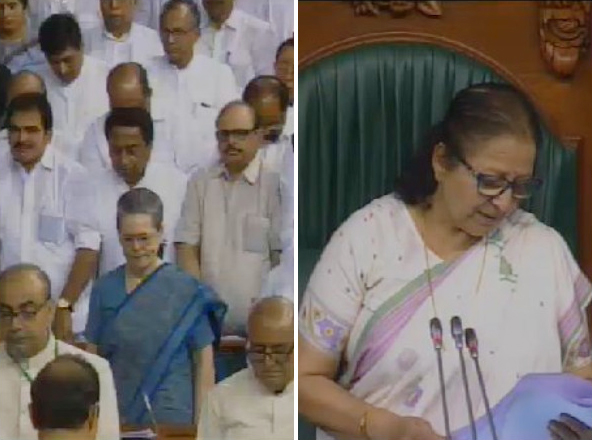 New Delhi: Amid power tussle, Shiv Sena on Monday raised voice against its former alliance partner BJP on the first day of the winter session of Parliament, seeking immediate relief for farmers affected by unseasonal rains in parts of Maharashtra and staged a walkout from the Lok Sabha.

Sena's stand-off with the BJP was visible in the lower House as its members were the first among other opposition parties to stage protest against the government and disrupt the proceedings.

Both the Sena and the BJP had fought the Maharashtra Assembly elections together, but failed to reach a power-sharing deal leading to imposition of President's rule in the state.

As soon as Lok Sabha Speaker Om Birla completed the obituary references, the Sena MPs stood on their seats and started shouting slogans saying, "we need justice for farmers".

In an editorial in its mouthpiece "Saamana", the Uddhav Thackeray-led Sena recently had raised the issue of farmers who have suffered crop losses and had advocated adequate compensation without attaching any conditions.

Other opposition parties joined the Sena MPs later but they sought the release of National Conference leader Farooq Abdullah from detention.

Abdullah has been in detention in Kashmir since August 5 when the Central government abrogated the special status of the erstwhile state.

The opposition, led by the Congress, including the National Conference, Nationalist Congress Party, Revolutionary Socialist Party and Dravida Munetra Kazhgam, went to the well of the House shouting slogans "stop dividing country" and "we want justice".

As Birla continued the Question Hour amid pandemonium, Sena's leader Vinayak Raut, an MP from Mumbai's Vile Parle, demanded compensation for the farmers from the Centre saying that their crops were damaged due to natural disasters. The party staged a walkout from the House.

Meanwhile, Parliamentary Affairs Minister Pralhad Joshi appealed to opposition MPs to let the Question Hour function smoothly, assuring them that the government is ready to discuss all issues in Zero Hour.

"Question Hour is the right of every member. I appeal to you (opposition) to let the Question Hour function. Government is ready to reply over any issue in Zero Hour," Joshi said.

As the protest continued, Birla assured the opposition that he was ready to give them a chance to speak as per rule but asked the MPs not to disrupt the proceedings of the house suggesting them to take their seats.