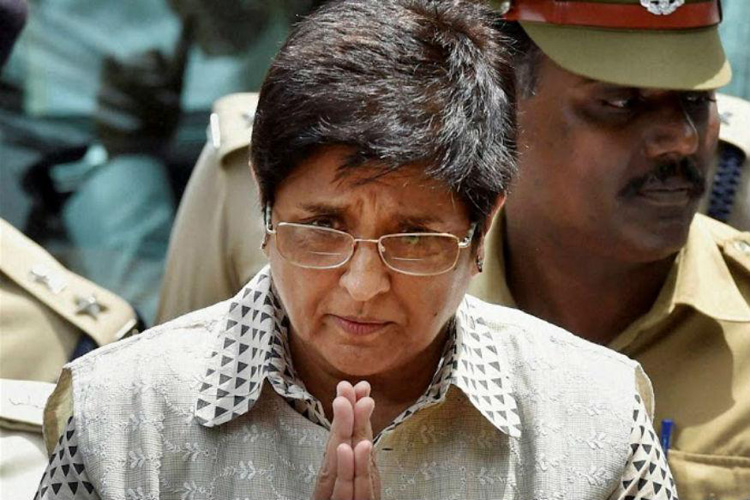 New Delhi: With loud chants of "Kiran Bedi lao, Delhi Police bachao", protesting Delhi Police personnel on Tuesday remembered the former IPS officer and drowned out seniors trying to placate them as they gathered to vent anger over their colleagues being thrashed by lawyers.

The reason for the police personnel remembering Bedi, the first woman Indian Police Service (IPS) officer, is rooted to a February 17, 1988 incident at Tis Hazari Court Complex. Bedi backed the police force and had a face-off with lawyers, who were protesting the handcuffing of an advocate on suspicion of theft.

Whereas, during the protest on Tuesday, Delhi Police Commissioner Amulya Patnaik was booed by constables after he asked them to call off the agitation.

Talking to IANS, an ailing woman police constable on the condition of anonymity said, "Our Golf-1 (Amulya Patnaik) is of no use. Had there been a Commissioner like Kiran Bedi, we wouldn't have taken to the streets to stage a protest. 'Kiran Madam' used to pay heed to the concerns of her sub-ordinates even constables/hawaldars."

"Whereas, he (Patnaik) didn't even visit the injured cops in the hospital. Monika Madam (Monika Bhardwaj, DCP, North district) and Sanjay Singh (Special Commissioner of Police Law and Order, Northern Range) suspended their sub-ordinates to save themselves. They were suspended for following the officers' instructions," she added.

"Had Kiran Madam (Kiran Bedi) been there, she would have led by example."

Kiran Bedi is also known as "Crane Bedi" for ordering the towing away of former Prime Minister Indira Gandhi's car from Delhi's Connaught Place area in 1982.

The senior IPS officer, however, couldn't become the Delhi Police Commissioner during her tenure as she was not an IPS "lobby favourite".