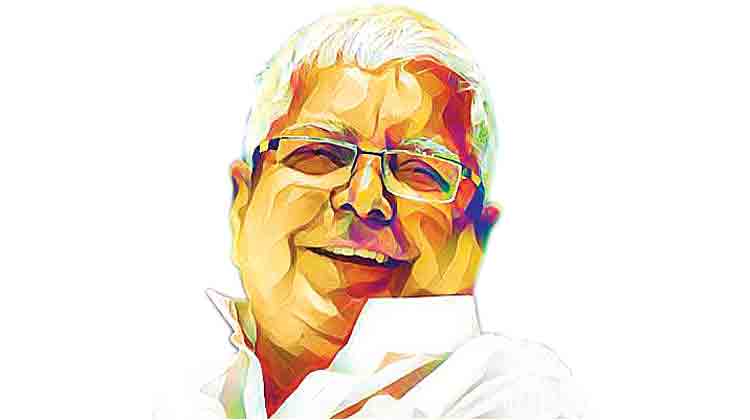 Lalu speaking to an audience _file

Patna: RJD national president Lalu Prasad on Wednesday made ingenious use of an old Bollywood number to take potshots at Bihar Chief Minister Nitish Kumar, his arch rival, who had pledged his commitment to a "Sangh-Mukt Bharat" but ended up realigning with the BJP.

The fresh salvo from the jailed leader, in Ranchi serving sentences in fodder scam cases, was occasioned by unveiling of a statue of Deen Dayal Upadhyay  a founding member of the BJPs pre-Emergency avatar Bharatiya Jana Sangh  by Kumar here on the previous day.

The twitter handle of the RJD supremo, operated by his close aides, carried a picture of Kumar paying his tributes to Upadhyay with hands folded and bowing from the waist alongside a screenshot of the invite for the ceremony issued by the state department for building construction.

As a lengthy caption, Prasad added lines from the song which had featured in "Phir Teri Kahaani Yaad Aayi", a 1990s venture from Mahesh Bhatt, who, incidentally, was known to share cordial ties with the RJD chief in those days.

"Tere dar par sanam chale aaye, tu na aaya to hum chale aaye. Bin tere koi aas bhi na rahi itne tadpe ki pyaas bhi na rahi (I have come to your doorstep my beloved, I made the move since you did not turn up. Away from you, I was bereft of all hope, I suffered so much that even my thirst died), were some of the suggestively chosen lines.

These were followed by close to the bone "isse pahle ki hum pe hansti raat, banke naagin jo humko dansti raat" (before the night could laugh at me, and bite me like a serpent) and a two-line parody "leke Sanghmukt Bharat ka bharam chale aaye,le ke apna bharam swayam chale aaye" (I came despite having had illusion of a Sangh-mukt Bharat and came of my own accord).

The allusion to "raat" (night) was not lost on the politically savvy public of the state which was a witness to the overnight drama of July, 2017 when Kumar had resigned, heeding his "inner voice" that revolted against RJDs refusal to accept the demand for resignation of his then deputy Tejashwi Yadav whose name figured in a money laundering case.

Tejashwi is the younger son of Prasad, whom the RJD supremo has nominated as his heir apparent.

Prasad, then out of jail, claimed that his party enjoyed the support of a majority of the MLAs of JD(U), headed by Kumar, fueling speculations of horse-trading.

He was outsmarted, though, by Kumar who formed a new government within less than 24 hours with the BJP, which came out with the offer of unconditional support and ended up enjoying power despite having lost the elections, even as the RJD cried foul.

Stripped of power despite having the largest number of MLAs, the RJD has since been raking up the episode with hopes of garnering sympathy. The tone may only grow shriller in the run-up to the assembly polls due later this year.