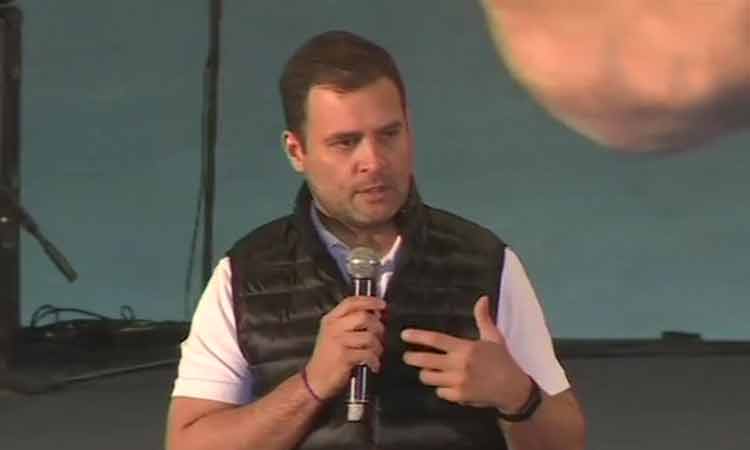 Poonia said Gandhi was known for doing things differently and this time while polls were being held in Delhi he did a rally in Jaipur. "It's a matter of surprise, from where does Rahul bring such political tact," he remarked.

Stating that people were forced to attend the rally, Poonia said since Monday night the business community was telling us about the police visits asking them to send all the employees to Albert Hall to hear Gandhi on Tuesday.

Similarly, school and college heads under pressure from the government issued circular asking students to attend the rally, the BJP leader added.

Poonia said students of Gyandeep College in Ajmer had sent him a video in which students were being forced into a bus and a voice was heard saying a minimum of 100 students needed to be sent to the rally and those who wouldn't come would have to bear the brunt and see reduced marks in practicals.

The rally, named Yuva Aakrsh Rally, lacked youths and aakrosh (anger), the BJP leader said and added, the youth were waiting for the promise Rahul made during Assembly elections that they would receive Rs 3,500 unemployment allowance a month.

Surprisingly, the "Crown Prince of India" said nothing on the new citizenship law (CAA) and the NRC, the BJP leader said.

Citing the National Crime Bureau (NCB) report, Poonia said Rajasthan had become one of the leading crime-ridden state. "Rahulji it's your government here and Rajasthan has witnessed maximum 65 per cent crime against women. You talk about the rape capital and Rajasthan is second in number of rape cases," he said.

"It's ridiculous that Rahul Gandhi during his speech thanked those who decorated the stage and praised the music band, but he could not show any achievement of the Congress government in the state," former Chief Minister Vasundhara Raje tweeted.

Beniwal, an NDA alliance partner, at a press conference in Nagaur said, "The major objective of the Congress was to divert the public attention from major issues, like locust attack, and law and order. In fact, Gandhi didn't speak on major promises made to people of the state, including farm loan waiver and unemployment allowance for youth."