text_fields
bookmark_border
Because of the One China Policy, even the United States legally recognizes Taiwan as Chinese sovereign soil. Beijing says that Taiwan is a renegade province 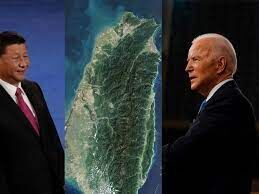 Almost the whole world recognizes Taiwan as legally part of China. Taiwan has been part of China for many centuries. It is true that it was seized by the Portuguese for some time and subsequently by the Nipponese. Neither Portugal nor Japan advances any claim to this island.

Because of the One China Policy, even the United States legally recognizes Taiwan as Chinese sovereign soil. Beijing says that Taiwan is a renegade province.

Even Taiwan says that it is part of China. However, the Taiwanese Government claims that it, rather than Beijing, is the rightful government of the whole of China. There is a certain but feeble logic to Taipei's position. In 1949, the Communists defeated the Guomindang in the Chinese Civil War. The latter had been the internationally recognized Government of China. The Guomindang fled to Taiwan. There they continued to say that they were the rightful Chinese Government despite controlling 1% of China's land and 2% of its people.

The US has a very cordial relationship with Taiwan and an increasingly antagonistic one with China. This pugilistic relationship is partly occasioned by China building artificial islands in the South China Sea and then laying claim to the territorial waters adjacent thereto. There are maritime territorial disputes between China and its neighbours. One should not automatically assume that Cathay's claim is invalid notwithstanding the appalling oppressive character of the Beijing regime. The United States has not been blameless either.

Taiwan has armed itself to the teeth. Most of its armaments are purchased from Uncle Sam. This is a nice little earner for the Americans.

For decades the People's Republic of China (PRC) attempted seduction, not abduction, in relation to the recalcitrant isle. The PRC's charm offensive was semi-successful. Taiwanese people and sports teams visited Mainland China many times. Mainland Chinese went to Taiwan. There was commerce. Some Taiwanese came to see that certainly for the middle class in eastern China life was not too bad so long as you did not irk the government. However, PRC grew frustrated that it was not changing public opinion fast enough. The belief that Taiwan would come home to the PRC of its own free will transpired to be a forlorn hope.

Hong Kong reverted to Beijing's jurisdiction in 1997. The PRC signed a treaty with the United Kingdom that the liberties of the people of the erstwhile British colony would be respected for half a century after the handover. The PRC soon began welching on that. It became increasingly oppressive. Mass protests managed to preserve the rights of Hong Kongers for a few years. But lockdown afforded the PRC an opportunity to pass the so-called Security Act. In reality, it is about the insecurity of Hong Kongers. They have no security of person. They can be imprisoned for decades for uttering an opinion. Advocating for independence is punishable by life imprisonment. They can be sent to Mainland China for an unfair trial in a closed court and then be made to labour as slaves. There is no free expression in HK any longer.

The Taiwanese had studied the cases of HK and Macau closely. Had these two former European colonies been well-treated then the Taiwanese might have come around to the view that rejoining China was a sound idea. But as they have observed that the PRC shamelessly reneges on its solemn promises and legally binding internationally treaties, the Taiwanese realise that the PRC is not to be trusted.

The PRC was incensed when Nancy Pelosi visited Taiwan in July 2022. The Speaker of the US House of Representatives is the highest American politician to visit the island in 25 years.

The Chinese have expressed their displeasure at Mrs Pelosi's visit by staging war games and issuing chilling threats. But it is thought unlikely that they will invade. A seaborne invasion is a very risky undertaking. The Taiwanese are armed to the teeth. The Chinese could conquer Taiwan but is it worth the cost of lives and possibly sanctions? They might take over the island as a heap of ruins. But China is running out of patience. President Xi wants this issue resolved under him. This autumn he will be re-elected to a historic third term. He may well invade Taiwan by 2027: the end of his third term.

The US Navy recently sailed through the Strait of Taiwan as a gesture of support for the beleaguered island. But why should the United States fight for Taiwan? Taiwan was de-recognised by the USA 50 years ago? Taiwan is not very important to the US in any sense.

It would be good if the USA could act as a persuader and convince Taiwan to go back to the PRC voluntarily. That would avoid bloodshed. Perhaps the United States could then have a more amicable relationship with the PRC. The risk is that allowing the PRC to reabsorb Taiwan could encourage the PRC to take another land. It has seized Tibet, some Indian land and some Tajik land. It might want more. Even the Russians are perturbed. The land north of the Amur River belonged to China in the 19th century. They may retake it when Russia is feeble. That time is not far off.

I feel for the Taiwanese. They have built a free and prosperous society. I would not want to lose that. However, rejoining China is inevitable. If only China were to treat its own people with basic decency then the Taiwanese might be open to persuasion.

The United States should not fight for this non-country. I am glad that my nation shall not.

The author is a political analyst from the UK, you can watch him on YouTube George from Ireland