text_fields
bookmark_border
There is not only a lack of creative proposals in the budget to solve this serious crisis - which leads the country to starvation – but the usual outlay for relief schemes like employment guarantee has also been slashed. 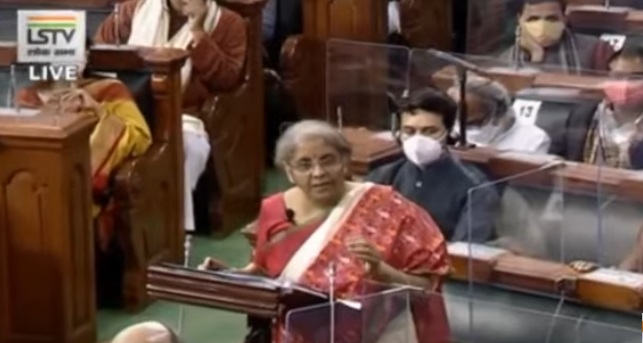 It is doubtful if central finance minister Nirmala Sitharaman's book of promises for 2021-22 contains anything new - other than the budget, covered inside the red cloth bag, coming out in digitised form. There is no deviation from the routine process of selling off the shares of remaining public sector undertakings (PSU) and putting more burden on the common man in many forms. On the other hand the old wine of corporate servility remains intact. Still, the criticisms heard last year are not there this time and the budget has invited mixed response. But there is a 'Nirmala magic' hidden behind it. Even a quick reading of the budget will show that the 'sell off' gala of PSUs, which was implemented in blatant form last year, is being repeated this time. But this year, all that has come to the accompaniment of popular declarations. The budget has been presented with emphasis on infrastructure development, and health care for the country to tide over the post-Covid recession. Health sector gets Rs 64,180 crore and Covid vaccination Rs 35,000 crore. And unlike the usual practice, infrastructure development for sectors like national highway, ports and railway transport has received a substantial allocation.

However, on the direct taxation front, in contrast to last year, no heavy taxation that would squeeze the common man, has been imposed this time. There is no change either in the tax structure; in addition, exploitative practices like the double taxation of non-residents have also been dispensed with. All these are declarations that would appear to carry a lot of merit. But coming to the brasstacks of the promises, the question arising is whether all this is workable. The million-dollar question is where all the money to keep such rain of promises will come from. The answer lies nowhere but in last year's budget – sell off everything that the government owns. Last year's budget – as also the economic stimulus package released on May 16 last year in the context of the pandemic - were marked by the disinvestment of PSUs. That has repeated this time too. Following major PSU's like BSNL, BPCL and Air India, the next turn came for LIC. Granting permission for more private and foreign investment in the sector of military, space and mining industries and putting up for auction of airports were part of that 'stimulus package'. This time the eye is set on insurance sector, in which the permitted foreign investment component has been raised from 49 to 74 percent. In a similar manner, other PSUs' equities also will be up for grabs in the coming days for the monopolies and corporates within and outside the country. The decision in the budget is to raise a corpus of Rs 1.75 lakh crore through this exercise.

Another source of additional revenue is charging a cess on petrol and diesel. The excuse given for this virtual fleecing, in the name of farmer welfare, is that fuel price will not increase due to this, since it will be managed by giving concession on existing excise duty. As per the decision now, the price may not go up in the short term, but in future, fuel prices are bound to shoot up in proportion to the rise in excise duty. In effect, it will break the back of the common man including the farmers. As for the proposal to mobilise revenue by raising customs duty on several items, the move is sure to result in major price escalation. In short, all the three sources of additional revenue will all but become a noose around the masses. That said however, corporates will have no major headache on these counts: they have several other schemes to benefit from.

Given that appeasing corporates is a declared policy of the Modi government, there is nothing surprising in Nirmala Sitharaman's budget carrying its marks. Even then, there were many who had hoped for some relief for the country and the people with broken backs, but they too have been badly let down. The extra allocation made for health sector is patently, and grossly inadequate. For the supply of free Covid vaccine, the government has set apart a mere Rs 35,000 crore, which means the vaccine will not be completely free. The allocation for education is also lower than that of last year. As a matter of fact, even before Covid, there was unemployment and economic recession. The country is in the middle of job losses unprecedented in the last four decade. There is not only a lack of creative proposals in the budget to solve this serious crisis - which leads the country to starvation – but the usual outlay for relief schemes like employment guarantee has also been slashed. Even as the farmer protest is at its crescendo, the budget seeks to hush up the issue by a mere verbal assurance of support prices. The major notable feature of the budget is that some special funds have been earmarked for those states where assembly elections are imminent. Among them, Kerala can take comfort from the fact that it stands to gain better than previous years, but overall the Centre and finance minister have neglected Kerala again. When such declarations, clothed in pure imagination but clearly impractical, keep repeating in budget after budget, it is any one's guess which direction the country is heading in.