A 'Patanjali formula' against Covid 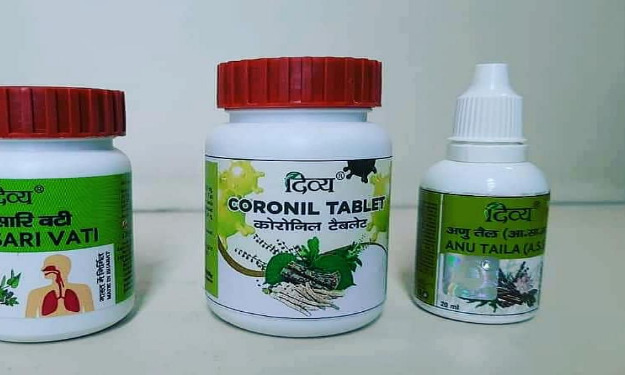 The FIR registered by Jyoti Nagar Police in Jaipur alleges violations under Drugs and Magic Remedies (Objectionable Advertisements) Act and cheating under Indian Penal Code (IPC). It was last Saturday that Ramdev and his team declared at a press meet in Haridwar that the company was introducing in the market an ayurveda drug for Covid prevention. The 'Corona kit' comprising 'Coronil' and 'Swasari' was offered for sale at Rs 545. Their claim was that controlled tests were conducted in Delhi, Ahmedabad and Meerut and later in NIMS and that the drug guaranteed hundred per cent result. But when the Ayush ministry entered the picture saying that the drug test did not have the approval of central and state governments, the kit had to be withdrawn. But even then Patanjali continued making its claims. And it led to a case when the outfit ventured with a further claim that its medicine was more effective than the ones being developed in the world against Covid.

Even earlier Patanjali had introduced several drugs in the market in similar manner, and many of them had later secured approvals too including that of 'Ayush ministry'. But for some reason, in the matter of Coronil drug, the ministry had to take a tough stand. Perhaps it could be because it has not yet been possible to hold corona virus in check and the scientific world is still awaiting the arrival of an effective Covid vaccine and so the Centre for now decided against taking risks in the name of Arsha Bharat culture. This however, does not mean that Ramdev's Covid kit will not see the light of day again. The only 'correction' from the ministry is that this this not the time to put the drug in the market. Otherwise, the Centre could have filed cases with severe charges against Ramdev and Patanjali under serious provisions.

It was none other than Acharya Balakrishna who said the drug was tested on 280 patients drawn from the three cities of the country and the clinical tests were conducted in NIMS after that. He also claims that 69 per cent patients recovered after three days of medication and the remining patients also attained recovery from disease after another four days. Further, tests conducted on rats were also successful. It can easily be gleaned that claims apart, none of the scientific norms was observed in these tests. The first phase of tests is said to have been conducted among patients who had arrived in the quarantine centre. And among those tested in Meerut, none of them had symptoms of Covid; it was a quarantine centre where people from other states had arrived. The case of clinical tests in MIMS is no different. None of those admitted there was in serious condition. Most of them had tested Covid-positive without disease symptoms. They were administered Coronil and Swasari and told that it was an ayurveda drug that would boost their resistance. And the recovery rate of that was only 35 per cent, which is far below the normal recovery rate.

This also means that had this medicine been in the market, it would have even caused a spread of the disease. It needs to be remembered that this road to trade in death was paved by a man who hangs around in the corridors of power in the name of 'Bharatiya heritage'. And if even in this time of pandemic, the ruling establilshment shows leniency to such an entity, that is only a commentary on who the government is committed to. In a way the first accused in this crime is Ayush ministry. This ministry, which was launched with the aim of promoting branches of medical science like ayurveda, has veered far away from that mission. Their prime agenda now is the growth of 'bharatiya science' formulated recently by the Hindutva politics, based on puranas and epics. They revel in projecting cow urine treatment for cancer and 'mritasanjeevani hunting' in a manner that would amount to defaming India's real scientific tradition. And medicines, which come out with no backing of any study, are accorded approval based on this sole criterion. Further, the guidelines issued in early March by Ayush ministry for the prevention of Covid, also went along the same lines. Notions that have no scientific basis were imposed on the people, as a result of which numerous patients would have been deprived of real treatment. People like Ramdev are making capital out of this dispensation, which enjoys the support of the market too. Therefore, if this 'drug experiment' which endangers human lives has to end, the first 'treatment' should be given to the Ayush ministry itself. Their job is research in alternative medical streams, not propagation of Hindutva.