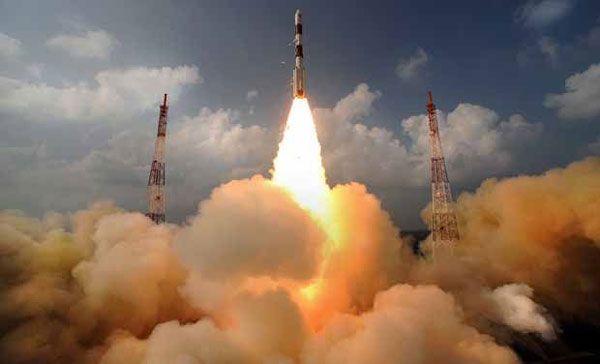 "The GSLV Mark III, scheduled to be launched in November first week, will carry four tonne class of communication satellites and it will help India achieve self-reliance in this," he told reporters here.

He was attending a felicitation ceremony organised by the Press Club here to honour a group of scientists of VSSC here, which played a significant role in the Mars mission.

He said the country had been launching heavy communication satellites from French Guiana (through Arianespace) at present and once the experimental mission was a success there was no need to depend on them.

On other post-Mars Orbiter Mission projects of ISRO, he said the launching of PSLV-C26, which would carry IRNSS 1C satellite, had been scheduled on October 10 from Sriharikota.

It was the third in the IRNSS series and four more satellites were under plans, he said.

"With the launching of all seven in the IRNSS series, we can achieve self-reliance in the field of navigation," he said.

Stating that ISRO's programmes for the next 25 years were well defined, he said Chandrayaan 2 and Solar Mission were also among the major projects in the offing.

"We are launching more navigation and communication satellites as they can bring immediate results. But, we need space missions like MOM also to study about this universe, formation of planets and so on. Otherwise we will become nothing in front of developed countries. It is already too late," he said.

Dathan also hailed Prime Minister Narendra Modi for his hearty and inspirational support which he extended to the ISRO scientists during the MOM insertion.