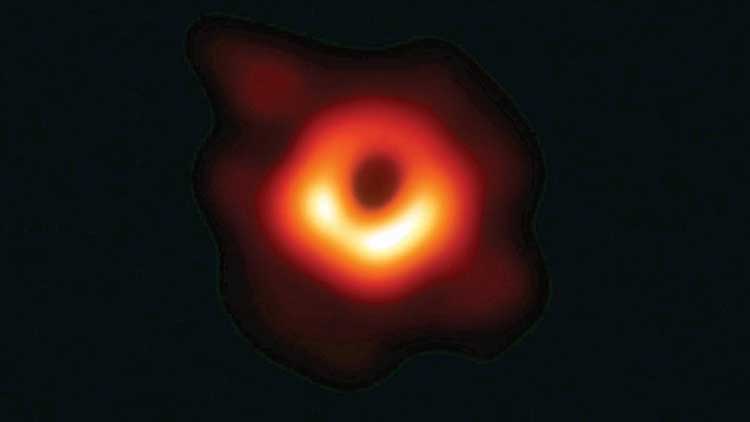 London: In a historic feat, astronomers announced on Wednesday that they have captured the first-ever image of a black hole in a distant galaxy -- the biggest tribute to the late Stephen Hawking who theorised about the existence of black holes emitting radiation in the universe.

The image - taken by a network of eight telescopes across the world - shows luminous gas swirling around a supermassive black hole at the centre of "Messier 87", a massive galaxy in the nearby Virgo galaxy cluster, the European Southern Observatory (ESO) said in a statement.

Described by the scientists as "a monster", the black hole resides 55 million light years from Earth and has a mass 6.5 billion times that of the Sun.

The team of scientists took almost 12 years to capture the image of a black hole.

"We have taken the first picture of a black hole. This is an extraordinary scientific feat accomplished by a team of more than 200 researchers," said Sheperd S. Doeleman from the Center for Astrophysics at Harvard and Smithsonian and Event Horizon Telescope (EHT) Project Director.

The EHT is a global network of radio telescopes that work together as one virtual, Earth-sized telescope, with a resolution sharp enough to "see" a black hole's shadow.

The breakthrough was announced in a series of six papers published in a special issue of The Astrophysical Journal Letters.

The presence of these objects affects their environment in extreme ways, warping spacetime and superheating any surrounding material.

"If immersed in a bright region, like a disc of glowing gas, we expect a black hole to create a dark region similar to a shadow - something predicted by Einstein's general relativity that we've never seen before," explained Heino Falcke of Radboud University, the Netherlands.

The space-time phenomenon was theorised by Einstein more than a century ago and later by British theoretical physicist Hawking who died last year.

According to the EHT, the black hole's boundary -- the event horizon from which the EHT takes its name -- is around 2.5 times smaller than the shadow it casts and measures just under 40 billion km across.

"The confrontation of theory with observations is always a dramatic moment for a theorist. It was a relief and a source of pride to realise that the observations matched our predictions so well," elaborated EHT Board member Luciano Rezzolla of Goethe Universitï¿½t, Germany.

"We have achieved something presumed to be impossible just a generation ago. We have taken a picture of a black hole," noted Doeleman.