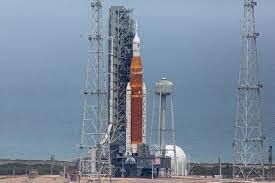 New Delhi: NASA successfully tested the Space Launch System (SLS), which will power the Orion capsule on the journey to the Moon.

The important dress rehearsal came weeks after the previous attempt was stopped by a fuel leak.

The date of first flight was to announce after the leak was fixed, according to reports.

However, NASA earlier this week went ahead with a critical countdown test of SLS rocket despite the fuel line leak.

The date generated from the critical tests will help better plan the launch.

No one will be on board the debut launch that will hurl the Orion crew capsule atop the rocket to the moon and back, according to India Today.

The three phases of the trip include the sending astronauts in 2024 going around the moon and returning, after the initial flight. The next or the third mission would help astronauts land on moon earlier than 2025.