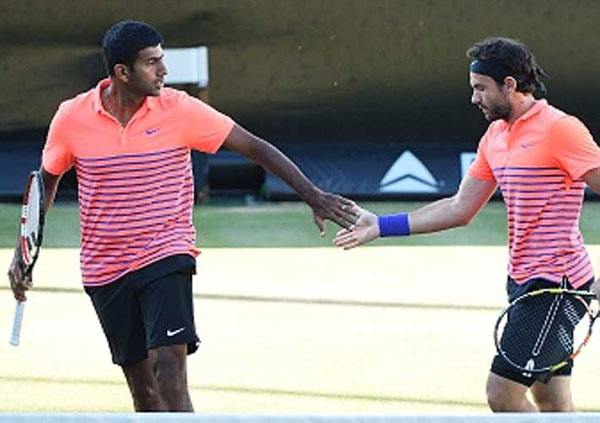 Melbourne: Indian stars Rohan Bopanna and Divij Sharan won their respective matches to enter the the pre-quarterfinals of the men's doubles category at the Australian Open tennis tournament here on Friday.

The 10th seeded Indo-French combination of Bopanna and Édouard Roger-Vasselin beat off a late fightback from Portugal's João Sousa and Leonardo Mayer of Argentina 6-2, 7-6 (7-3).

Sharan meanwhile, caused an upset of sorts along with his American Rajeev Ram as the duo edged the much fancied pair of Italian Fabio Fognini and Spain's Marcel Granollers in a tough three-set battle.

Bopanna and Roger-Vasselin did not face too much trouble from their unseeded opponents in the opening set.

Sousa and Mayer gave a stiff fight to their highly rated opponents in the second set before Bopanna and Roger-Vasselin managed to clinch a hard-fought victory in an hour and 16 minutes.

Bopanna and Roger-Vasselin will have to be at the top of their game in the next round as they will be up against sevetn seeds Mate Pavic of Croatia and Oliver Marach of Austria.

Pavic and Marach had clinched a hard-fought 6-7 (5-7), 6-4, 6-4 victory against the unseeded team of New Zealand's Artem Sitak and Wesley Koolhof of Holland in their pre-quarterfinal clash on Friday.

The Crotian-Austrian pair had registered a comfortable 6-1, 6-4 win over Víctor Estrella Burgos of Dominican Repulic and Federico Delbonis of Argentina in the opening round on Wednesday.

Earlier in the day, 16th seeds Sharan and Ram stunned Fognini and Granollers 4-6, 7-6 (7-4), 6-2 in a gruelling encounter which lasted for two hours and eight minutes.