The Supreme Court will hear appeal against Centre's decision on... 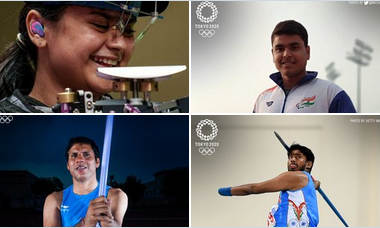 Tokyo: India has surpassed its best-ever medal tally at Tokyo Paralympics on Monday as the country which had won four medals in the 2016 editions has reached seven in the ongoing event. On Sunday, India had picked up a silver (high jump) and a bronze (discus throw), which is on hold due to a protest.

The F46 classification is for athletes with arm deficiency, impaired muscle power or impaired passive range of movement in arms, with athletes competing in a standing position.

The 40-year-old Jhajahria, already India's greatest Paralympian after winning gold medals in the 2004 and 2016 Games, pulled off a new personal best throw of 64.35m for the silver.

Jhajahria, who lost his left hand after accidentally touching an electric wire while climbing a tree at the age of eight, bettered his own earlier world record (63.97m) but gold winner Sri Lankan Dinesh Priyan Herath Mudiyanselage (67.79m), who set a new world record, was too good for the entire field.

The 25-year-old Gurjar, who lost his left hand in 2015 after a metal sheet fell on him at his friend's house, was third with a best effort of 64.01m. The Jaipur-based Gurjar had won gold in the 2017 and 2019 World Para Athletics Championships. He had also won a silver in the 2018 Jakarta Para Asian Games.

Earlier, discus thrower Kathuniya clinched a silver medal in the men's F56 event. The 24-year-old, Kathuniya suffered a paralytic attack at the age of eight which left him with coordination impairments in his limbs. Son of Army man and a B.Com graduate from New Delhi's Kirorimal College, Kathuniya sent the disc to the best distance of 44.38m in his sixth and last attempt to clinch the silver.

In the F56 classification, athletes have full arm and trunk muscle power. Pelvic stability is provided by some to full ability to press the knees together.

Apart from the three, shooter, Swaroop Mahavir Unhalkar has qualified for the final in the 10m Air Rifle SH1, finishing seventh in the qualifying round held on Monday.

The 34-year-old from Kolhapur will compete with Korea's Park Jih-ho, Ukraine's Yuril Stoiev and China's defending champion Dong Chao who qualified as the fifth-best with a score of 617.6. Jih-ho had scored a Qualifying World Record score of 631.3 to reach the final.