We are ready to help India host 2036 Olympics: Russian Minister 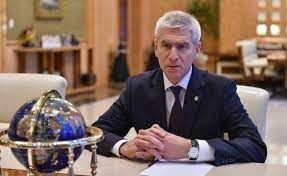 Mumbai: Russian sports minister said that India can rely on Russia's voluminous expertise in conducting Olympics if the country's ambition to host the 2036 Olympics comes through.

Visiting Oleg Matytsin told RIA Sport that Russia's "specialists will be happy to help in organising the Olympic Games in India".

Matytsin's offer of help comes in the wake of India's efforts to bring the games to the nation.

India has repeatedly expressed interest to host the 2036 Games with Indian Olympic Association (IOA) president Narinder Batra proposing a multi-city bid centred on Ahmedabad as the key destination, according to The Indian Express.

Giving thrust to the hopes of hosting Olympics first-ever in the nation, Gujarat's Advocate General Kamal Trivedi told the Gujarat High Court that Olympic Committee will visit in 2025.

The Minister is leading a Russian delegation to the International Convention Against Doping in Sport in New Delhi.