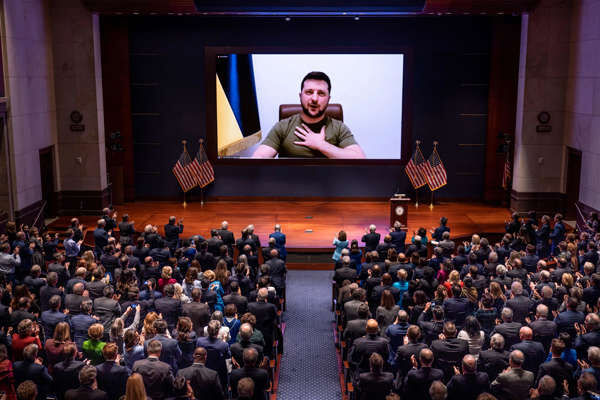 In an emotional video message, Zelenskyy said that the wall is not Berlin Wall but a Wall in central Europe, blocking freedom and bondage. It is growing bigger with every fall of a bomb in Ukraine, he told German MPs.

He requested German Chancellor Olaf Scholz to destroy the wall, evoking US President Ronald Reagan's words in 1987 about Berlin Wall. He told the MPs to give Germany the leadership it deserved.

But he also rebuked Berlin for not standing up to Moscow for years. He also mentioned about Berlin not cutting its energy and business ties with Russia.

He said that when Ukraine approached Germany against the Nord Stream gas pipelines, which was Russia's preparation for the war, Germany was more concerned about its economy. Now that "economy became mortar for the new wall", he said.

After Russia initiated its offensive over Ukraine, Germany joined the West and stalled the Nord Stream 2 project. It also stalled many energy, economic and security policy with Russia- some dates back to World War II, Agence France-Presse reported. Germany promised an increase in defence spending and dropped arms exports to conflict zones to aid Ukraine. Despite depending heavily on Russian gas, Germany said that it aims to lower Russian oil imports to nearly zero by the end of 2022. But, citing winter shortages and drive inflation, creating potential instability, it had resisted an immediate ban on Russian energy imports.