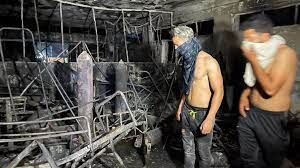 At least 82 people were killed and 110 people injured in a hospital fire on Saturday night in Iraq's capital city of Baghdad, the Iraqi news agency (INA) reported on Sunday. Initial reports convey that the fire occurred in an intensive care unit dedicated to treating Covid-19 patients at the Ibn Khatib hospital after an accident caused an oxygen tank to explode in the Diyala Bridge area of Baghdad.

"The fire of Ibn al-Khatib Hospital resulted in the killing of 82 patients and health workers and the wounding of 110 others. Many of the wounded are still in critical conditions," said Khalid al-Mahana, spokesman of the ministry, to a local channel.

On Sunday, the Interior Ministry declared three days of national mourning for the lives of people killed, with the Prime Minister Mustafa Al-Kadhimi suspending the health minister Hassan al-Tamimi.

AFP news agency quoted a hospital source as saying that about "30 patients were in the intensive care unit," which was reserved for the severe Covid-19 cases in Baghdad.

"Such an incident is evidence of negligence and therefore I directed that an investigation be launched immediately," Al-Kadhimi said in a statement as reported in the INA. He added that the hospital manager and heads of security and maintenance and all those concerned had been taken in custody and is under investigation until the negligence is found and held accountable.

The statement noted that the civil defence teams and firefighting vehicles put out the fire immediately and prevented it from reaching the upper floors.