text_fields
bookmark_border
Environmentalists and animal lovers have been asking everyone to keep a bowl of water outside the houses in order to help birds and other creatures. 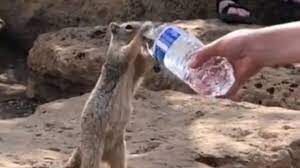 Scorching temperature is harder on animals than humans because they rely on nature alone for survival. People often forget how animals need help in keeping themselves fed and hydrated in the tough weather.

A woman is garnering praise for doing the kind thing and offering water to a thirsty squirrel. The short video shows a squirrel standing up on a stone structure and reaching up to the bottle offered by the woman. The small animal is drinking enthusiastically.

The nine-second-long video already has 2.5 million views. It was shared by Buitengebieden with the caption "stay hydrated". More than 10,000 users have already retweeted the post.

Many users in the comment section pointed out how thirsty the squirrel appears. Environmentalists and animal lovers have been asking everyone to keep a bowl of water outside the houses in order to help birds and other creatures.

Pets are also likely to suffer from heat stress. Some common signs of the condition are panting, increased respiration rate, increased drinking, loss of appetite, and lethargy. Young, sick, heavily pregnant, dark-coated, and heavy animals are more prone to heat stress than others.

Stray animals and creatures living outdoors are more likely to suffer from heat stress or heat stroke because they are forced to get out and about to seek food. They are supposed to follow a decreased food-seeking behaviour in warmer months but the scarcity of resources in nature due to climate change and exploitation by humans force them out.