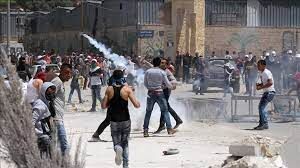 A representational image of clashes in West Bank

The court has reportedly made the decision on the grounds that the PA currently gives money to Palestinian prisoners and the families of martyrs who carried out attacks on Israelis.

Palestinian leaders termed the decision as 'piracy' of the Palestinian Authority's finances, and added that it was a collective punishment of Palestinian people by Israeli extremists and extreme right-wing groups.

Calling the decision an 'Israeli judicial extremism', Palestinian leaders urged international courts and human rights institutions to step in to end it.

Arab News reported, after accessing the 68-page court decision, that the decision would help Israeli victims of terror attacks sue the Palestinian Authority, no matter whether the attacks take place in the West Bank or Hamas-run Gaza.

At the weekly cabinet session of Palestinian Authority, Prime Minster Mohammed Shtayieh termed the court decision as "Unacceptable, illegal and illegitimate", and added that Palestinian government was doing its duty to "orphans of the sons of martyrs, prisoners and their families."

The court made the decision following an appeal by four families whose relatives had been killed 20 years before in Palestinian attacks during the Second Intifada in Jerusalem.

The Supreme Court said it was proven that the PA transferred money to the perpetrators or their families, though the authority did not accept any responsibility for the attacks, the report said.

The court's ruling does not mean that PA has to pay compensation to those injured or killed in attacks. Instead, the decision allows people to sue PA.

He urged the international courts and legal and human rights institutions to put an end to Israeli judicial extremism.

Arab News talking to a Palestinian security source reported that implementing the court's decision could be a complicated, leading to devastating effects.

According to the source, Israel currently imposes taxes and tariffs on imported Palestinian goods. It then transfers the funds each month to Ramallah after deductions.

In the event of any Israeli getting wounded or killed in an attack by Hamas, Israel will deduct the compensation from Palestinian tax money, which it collects on behalf of the PA, the report said.