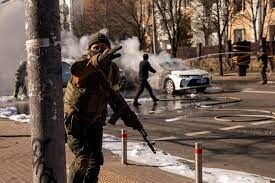 Kyiv : More than bombing a nation into oblivion, a war is also about wrecking its people psychologically.

Much in the vein, Kyiv is seeing mysterious symbols on the capital city's high rise buildings.

Red and orange crosshairs with some visible only under UV light, painted on several buildings here, send jitters across social media.

Many believe Russian saboteurs to be at work marking out targets for aerial attack, according to Daily Mail.

As soon the symbols appeared, fears sparked in the nation; alongside, Ukrainian authorities posted warning on social media, while encouraging people to cover symbols up.

"City officials are asking residents of high-rise buildings who have access to the roof to urgently check the rooftops for symbols," the post read.

"If any symbols are found, please cover them up with dirt or something else," it added.

The symbols marked on buildings give rise to concerns that Ukraine could face greater attacks in the coming days, with precision attacks on standing buildings. This is all the more so after Kremlin asked civilians this morning take "a safe highway' to the southwest.

Experts who are aware of the Russian war tactics in Syria find a parallel here, with Russian military leaders back then asking civilians to leave cities before pounding the nation with heavy aerial attack, supporting Bashar al-Assad.

Target marking at Kyiv for aerial attack is reminiscent of how RAF and German Luftwaffe pioneered the idea in World War II.

More inputs from the Kyiv say that Ukrainian military seizing light-emitting beacons, believed to be target indicators (TI) for Russian aircraft, around the city

Painted crosshairs belonged to old-timey tactics for target indication as they are less susceptible to jamming and hacking compared to technology-driven methods, according to Daily Mail.