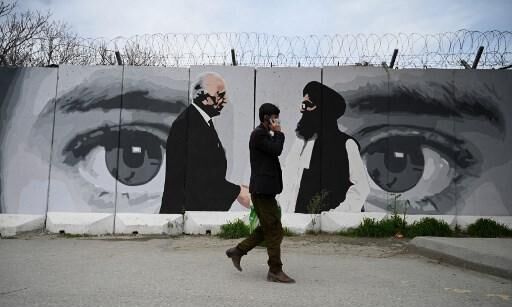 Hours after US president Joe Biden justified the withdrawal of American troops from Afghanistan, the Taliban claimed that it is in control of 85% of the country. The terror organisation announced that it has seized the border town crossing with Iran, Islam Qala.

A delegation of Taliban officials was speaking in Moscow when they claimed to be in control of 250 out of 398 districts. The claim is impossible to verify independently. The government of Afghanistan, however, has disputed the claim.

With the addition of Islam Qala, the Taliban is now in control of an arc of territory from the Iranian border to the frontier with China, reported AFP. Taliban spokesman Zabihullah Mujahid said that Islam Qala is under the full control of the organisation.

Government officials in Kabul claim that a fightback to regain the town's control is underway. Interior ministry spokesman Tareq Arian told AFP that all security forces, including the border units, are present in the area, and efforts are underway to recapture the site.

Taliban has been gaining control over much of northern Afghanistan in the past few weeks; the government has power over a few constellations of provincial capitals that must be largely reinforced and resupplied by air. With the Taliban's growing influence in the north and west, the air force of the country is overwhelmed.

While speaking about the withdrawal of US troops from Afghanistan, Joe Biden said that it was "highly unlikely" that Kabul will have control over the entire country. He added that the status quo is not an option. He also said that a Taliban takeover is not inevitable.

Taliban spokesman Suhail Shaheen said that any day or hour that the US and foreign troops leave earlier is a positive step, AFP reported.

This week, Afghan commandos faced the insurgents in a provincial capital for the first time. President Ashraf Ghani said the government could handle the situation despite the difficulties.

He said that the county is witnessing one of the most complicated stages in Transition. "Legitimacy is ours; God is with us," he added. Thousands of people fled the Qala-i-Naw in northwest Badghis province.

The Taliban is looking for "negotiated settlement" and "do not believe in the monopoly of power", said Shaheen. The Taliban appears to be aiming for a full military victory after the announcement of US troops' withdrawal.