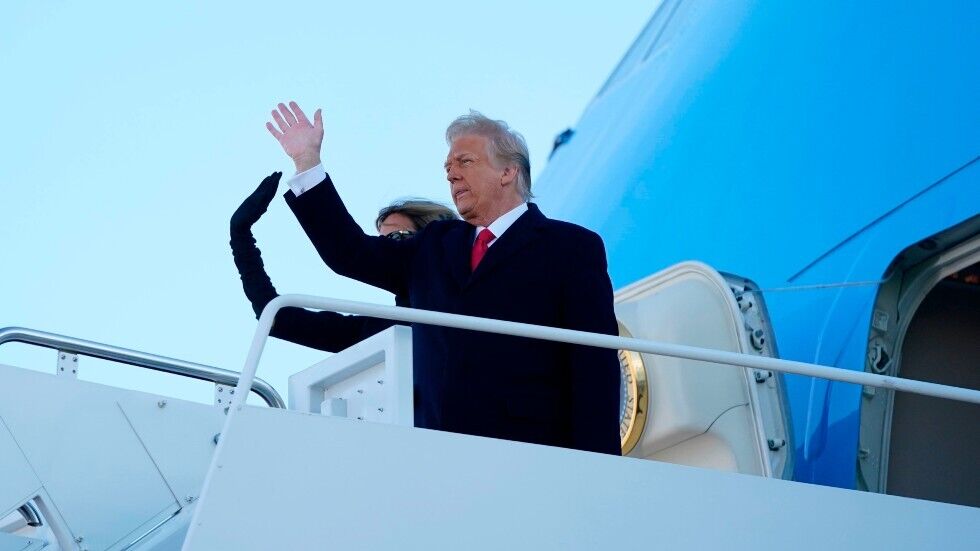 Washington: After a lot of debacle, finally US President Donald Trump has bid farewell to the White House. He departed in Air Force One for Florida just hours ahead of the inauguration of Joe Biden's inauguration.

Trump, who is breaking with an over century-and-a-half old tradition by skipping the inauguration of his successor, sought to list the achievements of his tenure before leaving the US capital on Wednesday.

"This has been an incredible four years," he said at a small farewell event at Joint Base Andrews, attended by family members and close aides, before using the presidential jet for one final time - to fly home to Florida's Palm Beach.

He then invited First Lady Melania Trump to speak.

"Being your First Lady was my greatest honour. Thank you for your love and your support. You will be in my thoughts and prayers. God bless you all. God bless your families. And God bless this beautiful nation. Thank you," she said in her brief remarks.

Taking back the mike, Trump listed his achievements.

Trump also dwelt on the coronavirus pandemic which blighted his last few months in office. "We did something that is a medical miracle and that is the vaccine," he said.

Terming the virus again as the "China virus" and a "horrible thing", he extended "great love" to the families who have suffered greatly.

Trump also had a word for his family. "People have no idea how hard this family worked. They could have had a much easier life, but they just did a fantastic job," he said.

He also called his wife a "woman of great grace and beauty and dignity", who was "so popular with the people".

Addressing his supporters, Trump asserted that he will "always fight for you" and will be "watching and listening".

"We will be back in some form," he said.

Trump also wished the new administration "great success" for the future - but did not address incoming President Joe Biden or Vice President Kamala Harris by name.

The Trumps left the White House for the last time early on Wednesday morning - hours before Biden and Harris were to be sworn-in.

Accompanied by the First Lady, Trump, whose term ends at 12 noon (US time), flew from the White House lawn on a presidential chopper, Marine One, to the Joint Base Andrews.

He paused to speak to a small group of reporters before boarding the chopper.

Invitations had been sent to several Trump aides, present and former, to attend the farewell ceremony, with each guest allowed to bring five guests in a bid to gather a sizeable crowd. However, with the list comprising many with whom the parting had been acrimonious, it seemed not much attention had been given to vetting it.

Several people, said to be invited, had expressed their reluctance to attend the event.

Top leaders, including Vice President Mike Pence, and leaders of the Republican Party in the Congress, also gave the event a miss. They are supposed to join Biden at the Cathedral of St Matthew the Apostle for morning mass.