US teacher taken to hospital after 5-year-old's attack 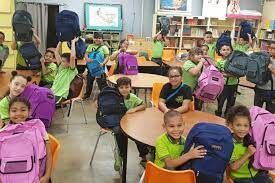 There are times when teaching kids proves to be a high-wire act. You don't know what a student is up to, especially when kids are a handful.

A US teacher is recovering after being attacked by a five-year-old student with his fists and feet last week.

The teacher had to remove from the class the five-year-old and a four-year-old - exceptional student education (ESE) students for throwing things around.

The attack took place shortly after 10 am, according to police report. The teacher took the boys to the "cool down" room where the five-year-old vented his anger at the teacher. The teacher is said to be in her late 30s or 40s, according to local media report.

The attack was quite unexpected that the teacher may have gotten dazed as the report said.

A stretcher was brought in to carry her to Memorial Regional Hospital in Hollywood and was later discharged. The teacher suffered concussion and other injuries in the incident.

The student was probed for 'aggravated assault with hands, fist and feet'—however he was not criminally charged.

The Pines Lakes Elementary School has nearly 800 students, from pre-kindergarten through the fifth grade.

ESE helps children with a disability progress in school and prepare for life after school.