We are not the only polluters: Dutch farmers against Govt on emission 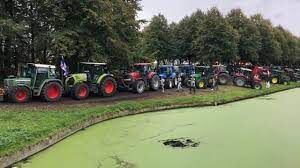 The Hague: Dutch farmers in the Netherlands on Wednesday gathered at highways in tractors as a part of the protest against the government's decision to control emissions of nitrogen oxide and ammonia produced in livestock.

A huge delay in traffic was experienced in the central Netherlands as thousands of farmers were gathered for the protest organized by a farmer from the agricultural village of Stroe.

The government has currently set aside 24.3 billion euros ($25.6 billion) for the implementation of their latest policy, which will adversely impact farmers as the number of livestock will get significantly reduced.

The policy was also opposed by Prime Minister Mark Rutte's party and other members of his coalition, as reported by the Associated Press.

Although farming is an important contributor to the Dutch economy, farmers have not been able to reduce the production of polluting gases. Hence, this is an unavoidable transition, the Dutch government said.

However, in the protest, farmers said that it is not right to consider the agricultural sector as the only-major polluter.

Many farmers and supporters assembled near the Dutch Parliament on Wednesday in T-shirts raising slogans "No farmers, no food." They even gathered for breakfast before the protest.

"I was asked to come here and provide breakfast, so we can show we are food producers, not pollution producers," said Jaap Zegward, the dairy farmer.