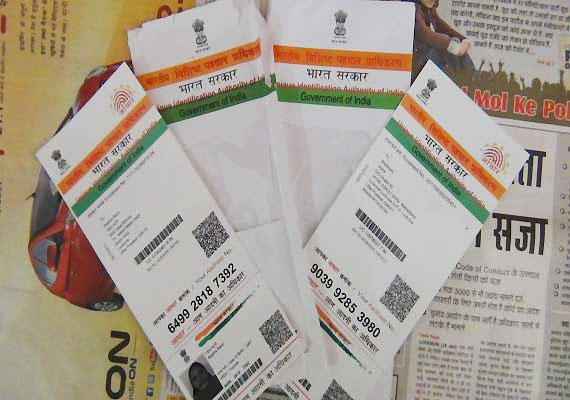 It was the organization known as Unique Identification Authority of India (UIDAI) that mooted the idea of providing the citizens with a unique identification number called Aadhaar during the tenure of the erstwhile UPA government.

The scheme which costs crores and affects each and every person of the country wasn’t backed by any law. In fact, it was initiated with the support of an executive order released on January 28, 2009. Aadhaar card is a twelve digit identity number which includes biometric data like the fingerprint and iris scans of the citizens. The potential risk of collecting biometric data without any legal backing had been questioned before. Not only was the scheme initiated without any legal backing, but Aadhaar was made mandatory for accessing government services. Many approached the court questioning the move. There were several instances of the court issuing verdicts against making Aadhaar compulsory. It was then the Central government passed the Aadhaar Act in the Lok Sabha on March 11, 2016. Still there existed many obscurities regarding its character. The court again passed verdicts as well as criticisms about the issue. Finally on March 27, 2017, a bench led by Supreme Court Chief Justice K S Khehar maintained that the government cannot make Aadhaar mandatory for welfare schemes. The apex court was considering a group of pleas filed against making Aadhaar compulsory for mid-day meals in schools.

Even while the court verdicts were being passed, the clutches of Aadhaar has been tightening its grip on almost every aspects of life. There is no answer as to who is responsible for the scheme and on what basis it was being implemented. While the argument that the unique identification project was the world’s largest identity project backed by the latest technology, reverberates on one side, ambiguity is the only answer to the rudimentary questions related to Aadhaar. The discussions in the Rajya Sabha on Wednesday and Union Minister Arun Jaitley’s reply underlines these obscurities. Civil rights activists had since the beginning raised concerns about the safety of the data collected for Aadhaar scheme. The biometric details of an individual being private and personal, its safety is important. However, reports that has been surfacing of late, prove that such anxieties are justified. Complaints of several private companies getting hold of Aadhaar details are rampant. The Aadhaar details of former cricket captain Mahendra Singh Dhoni were leaked following which the cricketer’s wife Sakshi filed a complaint. When it triggered discussions in the Rajya Sabha, Minister Jaitley came up with a very strange reply to counter the questions. He said that even the Pentagon got hacked without Aadhaar.

There were debates in the Rajya Sabha between P Chidambaram who advocated the Aadhaar scheme during the tenure of UPA government and Minister Arun Jaitley. Jaitley said that Aadhaar was a ‘great initiative’ of the previous UPA regime and added that it was only being expanded by the present government. Despite of these, he could not guarantee about the safety of the scheme. According to the estimates on February 28, 2017, about 1, 12, 25, 53, 603 citizens of the country, which comes to 88 per cent, have been issued Aadhaar cards. About 85. 368 billion was spent for the purpose. The government is moving ahead with measures to make Aadhaar mandatory for all transactions ranging from issuing mobile SIM cards to bank accounts. It’s a fine idea to integrate the official documents frequently required by the citizens. Visiting even the Village and Taluk offices for trivial reasons still prevails in the country. A major part of a citizen’s life goes standing in queues.

Therefore a unique ID which resolves this problem is certainly welcome. There are similar schemes in several developed countries. However, the government seems to have no proper answer as to whether Aadhaar will be a basic identity document of citizens. The government at present, states that Aadhaar isn’t mandatory. But it also keeps saying that no transactions would be possible without the Aadhaar card. This double standard should stopped. If Aadhaar is supposed to be a basic identity document that ‘authenticate’ citizens, it should be clearly stated. The legal backing and safety facilities required should be arranged. A situation should prevail where all transactions can be carried out using only one unique document instead of wasting one’s life in queues. The project will be fruitful only then. But if Aadhaar is considered as a shortcut method to cut down subsidies, the people should not be made to suffer. Therefore the government should first and foremost, clear the ambiguities related to the scheme.