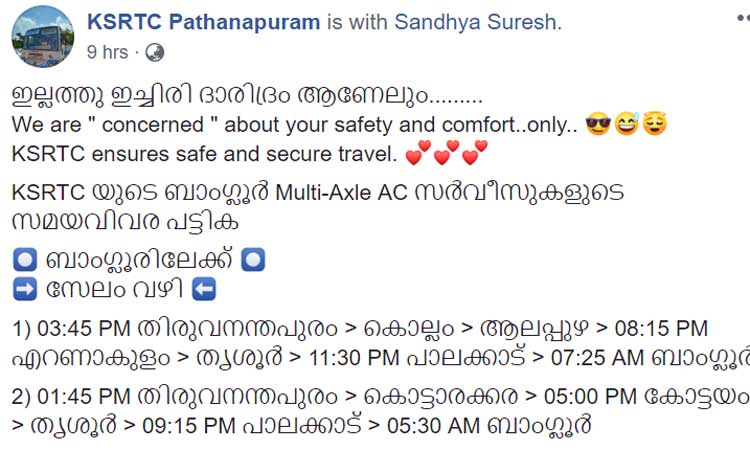 Kerala State Road Transport Corporation (KSRTC) is one of the oldest public sector organisations in the state.

Although the organisation is one with a glorious past, people consider it as one big joke. They have already begun wondering if that institution which has turned into a perfect example of inefficiency, should continue functioning the same way. Its monthly loss comes up to Rs 140 crore. Alternating governments that came to power had made attempts of different kinds to save KSRTC. Several committees were formed for that as well. Things reached such a stage of ridicule that if the reports of all these committees were disposed off, KSRTC would have got a bulky return.

The LDF government came to power declaring that it would make KSRTC profitable in three years. Professor Sushil Khanna of Indian Institute of Management Kolkata was entrusted with the task of submitting the revamp package of KSRTC. The organisation is currently functioning according to the Sushil Khanna report. IPS officer Tomin Thachankary was appointed as the CMD of the company in April 2018.

However, even as Thachankary moves ahead with his work, protests have been raised by different unions in KSRTC. It is clear that excessive trade unionism has played a major role in destroying the Corporation. There are absurd instances like withdrawing dozens of bus services even for union unit meetings. We had written in this column about cancelling more than 20 bus services as part of CITU unit meeting in Punalur depot in Kollam district on July 4 2017, then. What is amusing is that this incident took place the very next day of the State finance department announcing a relief package of Rs 130 crore to save KSRTC from the financial crunch. Incidents of this kind for union extravaganza are rampant in KSRTC. Now the reason for the parties, irrespective of ruling or opposition, organisingstrikes is that several different union luxuries will be ended. A strike has been announced on August 7 as part of the protest.

A strike declaration convention was held in Thiruvananthapuram on Tuesday led by prominent trade unions such as CITU, AITUC and INTUC. The convention which was attended by LDF Convenor Vaikom Viswan and CPI leader K P Rajendran reacted sharply to the new reforms. CITU State president Anathalavattom Anandhan, who made the keynote address, spoke with abusive language against Tomin Thachankary. 'The employees do not give the CMD's order even the value of a dog. Labourers have organised strikes and brought employers to their knees. Thachankary was not born then', so goes his words.

This is not to imply that everything that Tomin Thankary is doing is a glorious act. The government appoints a commission at a cost of lakhs of rupees to save KSRTC. And then, in order to implement the commission's recommendations, the government appoints a top official as CMD. The moment he starts his work, labour unions on the government's side enter the scene with a strike. This is a queer picture, for the subjects raised by the workers' unions are entirely related to their union. They have chosen the path of strike based on the difference of opinion regarding union collections, promotion, and union activities during working hours. There is doubt that this strike will not win the support of the people. The people in general do realize the excessive role played by trade unions in weakening KSRTC.

A phenomenon of people who lose their homes and job premises in the name of various development schemes taking to strikes, has become rampant in recent times in Kerala. And the Pinarayi government has been adopting a policy of ruthlessly suppressing these strikes. The government and the ruling party CPM generally took the line that these popular agitations are extremist activity. It remains to be seen how the government - which met those strikes of ordinary people facing loss of their home and land with a heavy hand – is going to handle the strike currently evolving against implementation of government policy. It is sad that everybody is interested in protecting their union's supremacy, and not in rescuing KSRTC.