Formula One needs to learn from accident-prone Jeddah race: George... 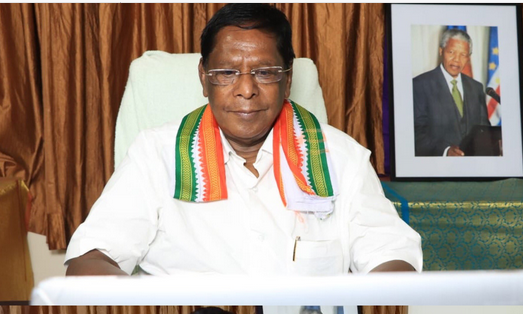 Puducherry: Puducherry Chief Minister V. Narayanasamy on Monday resigned after his Congress-led government collapsed just before facing the floor test in the Assembly.

After the dramatic walkout by Narayanasamy and his MLAs, Speaker V. P. Sivakozhundu announced that the government has lost its majority.

"In the Assembly, we said only the elected members can vote. The Speaker did not agree and we walked out," he said.

With this the Congress lost its only government in the south. As the Assembly polls in the union territory are due in May, it remains to be seen if Lieutenant Governor recommends President's rule or invite NR Congress-led opposition alliance to form the government.

The opposition has 14 members in the 30-member Assembly whose effective strength is 28. It also enjoys the support of three nominated MLAs, all declaring allegiance to BJP, although debate is going on between the fronts in the state on whether nominated members have voting rights in a vote confidence.

After his hard-hitting speech, slamming the Centre for colluding with the opposition to topple his government and arguments over voting rights of three nominated MLAs, the chief minister and his MLAs walked out of the House.

Addressing the Assembly ahead of floor test, he alleged that the BJP is derailing India's democratic system.

"What is happening in Puducherry now is political prostitution. But the truth will prevail," he said.

He alleged that former Lieutenant Governor Kiran Bedi and the Centre colluded with the opposition to destabilize his government.

Naranasamy, whose government slipped into minority due to the resignation of six MLAs of the ruling alliance during the last one month, said that the MLAs who resigned will not be able to face the people as people will call them opportunists.

"As our MLAs stayed united we managed to pull off the last five years. The Centre has betrayed people of Puducherry by not granting funds we requested," he said.

He claimed that people of the union territory are with the Congress-led government. He pointed out that after forming the government with the support of DMK and independent MLAs, the alliance won all by-elections.

"People trust us as our government was elected by them. The opposition who are unable to win the elections are trying to destabilize the government," he said.

Telangana governor Tamilisai Soundrarajan, who took on the additional charge of Puducherry Lieutenant Governor on February 18, directed the chief minister to prove his majority in the Assembly.

The development came after the opposition alleged that the government slipped into minority after resignation of four MLAs.

Two more legislators resigned on Sunday, reducing the ruling alliance's strength to 12 in the 30-member Assembly.