EC bars DMK MP A Raja from campaigning for 48 hours 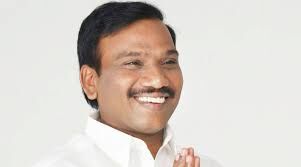 The Election Commission on Thursday barred DMK MP A Raja from campaigning for 48 hours with immediate effect. A Raja has also been delisted from the star campaigner's list for making a "derogatory and scandalous" speech against Tamil Nadu Chief Minister K Palaniswami on March 26th during an election campaign.

"The commission delists your name from the list of star campaigner of DMK and debars you from campaigning for 48 hours with immediate effect. The commission also advises you to be watchful and not to make intemperate, indecent, derogatory, obscene remarks and lower the dignity of women in future during election campaign," said the commission.

The commission received a complaint on March 27th through Chief Electoral Officer Tamil Nadu from All India Anna Dravida Munnetra Kazhagam (AIADMK), alleging that A Raja had made a derogatory and scandalous speech against the CM during the election campaign on March 26th at Thousand Lights Assembly constituency. On the basis of reports and transcripts of the statement, the commission noted, "You had inter-alia stated that Stalin (DMK President and the son of former Tamil Nadu Chief Minister M. Karunanidhi) is a child of good relationship and good birth while Palaniswami is a child of bad relationship and a premature born child".

"In your Meensurupatti speech at 8.30 p.m., you have stated that (i) you crawled and held Sasikala's feet to come to this position (ii) ...But EPS who considers that he is having knowledge and dignity, just for the sake of CM post, crawled and held Sasikala's feet who is almost equal in age or to say who is six months younger. You crawled prayed on her feet, isn't it how you came (iii)...Whereas, born in an illegal manner, in a premature birth is EPS," EC added. The action followed after the poll body deemed A Raja's response on the allegations as 'unsatisfactory'. Raja had denied all charges against him. "Your reply was not found satisfactory. It was also observed that asking for more time to represent is an attempt to buy time which the commission cannot afford to give in the midst of elections," said EC.

The commission found the contents of the speech a serious violation of the model code of conduct. It noted that the speech was derogatory and obscene and lowered the dignity of motherhood of women.