Path of justice is confronting crimes against humanity: Nidaa, Saudi...

Even in her coma, Aruna triggered changes in euthanasia law 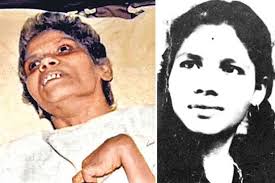 Mumbai: One moment of murderous lust by a hospital contract sweeper consigned a young woman looking forward to her impending marriage to over four decades of a vegetative half-life.

But Aruna Ramchandra Shanbaug's plight attracted attentive devotion of her sister nurses, touched millions of Indians and led to the apex court's intervention to change the country's euthanasia laws.

It was the night of Nov 27, 1973 in the dimly-lit basement of Asian's biggest public hospital, the BMC-run KEM Hospital that Aruna's life changed. Ending her shift and changing before returning home, the 25-year-old was all excited as she was proceeding on long leave - to prepare for her upcoming marriage with a doctor - Sandeep Sardesai.

But the five-feet-tall, petite nurse was suddenly attacked from behind by a man, who pinned her down and choked her with a dog leash.

Before she could even let out a whimper for help, the assailant, later identified as Sohanlal B.Walmiki, sexually assaulted her, and abandoned her on the floor, gasping for breath, bleeding, writhing in pain and totally helpless.

Aruna lay there for around 12 hours before she was discovered and taken upstairs for medical treatment.

But the attack had snapped the oxygen supply to her brain, resulting in a brain stem and cervical cord injury leaving her near-total blind and in a permanent vegetative state. Aruna remained in this condition until a fortnight before her 68th birthday when she breathed her last.

Born on June 1, 1948 in Haldipur in neighbouring Karnataka's North Kanara district, she had come to Mumbai to pursue her dreams - both personal and career-wise.

Anant Gaitonde, her teacher at at the KEM Nursing College in the early 1970s, remembers Shanbaug as "a very intelligent nursing student" and "always of a very helpful nature - going out of the way to help her co-students".

The incident happened just when she was planning to settle down in life, both personal and professional. "The perpetrator got away with a minor punishment, but she suffered all her life," Gaitonde told IANS.

Police registered a case of robbery and attempt to murder as the hospital authorities allegedly suppressed information of her rape to avoid her social ostracism and since she was planning to get married soon. Walmiki was subsequently arrested, convicted and sentenced to serve two concurrent seven years sentence. Released later, he is believed to be settled in Delhi.

Aruna meanwhile remained in a coma in Ward 4 A of KEM but did not lack support.

"Contrary to perceptions, her fiance did not desert her. He dedicatedly looked after her and awaited a miracle to continue their broken lives for over two years. But later, social and other commitments compelled him to move on in life," author-journalist Pinki Virani, who penned the best-seller biography "Aruna's Story" in 1998, told IANS.

As the years passed with little hopes of Aruna's revival, the nurses in KEM took on her care as their personal responsibility.

The nurses' unprecedented commitment earned admiration even from the Supreme Court, and the hospital authorities, but time was not kind to Aruna - leaving her body shrivelled into a ghostly shadow of her former robust self, hair greying and falling, teeth lost.

Moved by her lamentable plight, Virani in December 2009 filed a plea in the Supreme Court seeking "mercy killing" for Aruna.

But the nurses were aghast. "We take turns to tend to her just like any small child. She keeps aging like all of, but does not create any problems for anybody. We love to take care of her. How could anybody think of ending her life?" said one.

A year after Virani's petition, the apex court sought a report on Aruna's health status from the hospital and Maharashtra government and a three-member medical panel concluded that she met "most of the criteria of being in a permanent vegetative state".

Rejecting Virani's plea for mercy killing, the Supreme Court in March 2011, in a historic judgment, allowed "passive euthanasia" for the first time in India.

Vesting the power of choice in the hands of the individual, over government, medical or religious control, the Supreme Court specified guidelines for passive euthanasia, including withdrawal of medical treatment or food that would allow the patient to survive.

The rulings were greeted with much cheer, cutting cakes and distributing sweets at the KEM hospital with nurses terming the outcome as a "rebirth for Aruna".

"All these were ratified by the government last year. Though Aruna failed to get justice in her lifetime, she has given such a big gift to the nation," Virani told IANS.

In the 1998 biography, Virani did painstaking research, meeting Aruna's colleagues and relatives, and her fiance, checking out police, hospital and court records to discover that Walmiki was never charged with rape as nobody came forth to file a rape case against him, which could have given him a longer sentence.

Aruna's story also influenced Marathi writer Dattakumar Desai, who penned a play "Katha Arunachi" about her. It was staged in 2002.