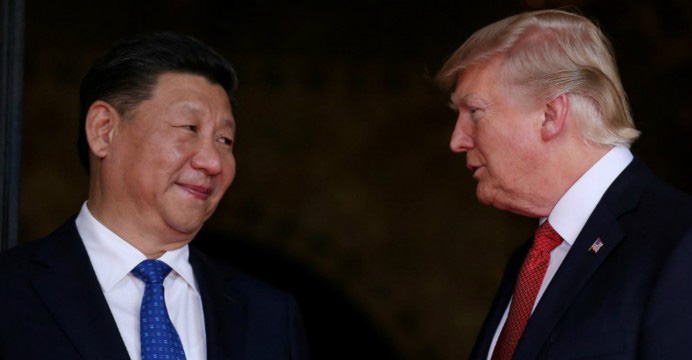 The two leaders met in Beijing's Great Hall of the People for talks following the US president's glitzy royal welcome in the Chinese capital. Trump said he and his counterpart believed that the North Korean crisis can be solved.

"Our meeting this morning... was excellent in discussing North Korea and I do believe there is a solution to that, as you do," Trump said.

China is the crucial stop in Trump's five-nation tour of Asia.

Earlier during the trip, Trump had asked North Korea to make a deal to end its nuclear weapons programme, while also warning it against further provocation against the US and the world.

He also urged China to sever ties with Pyongyang and reiterated calls for Beijing to ramp up pressure. China has maintained it is doing all it can and insists it is fully enforcing UN sanctions.

The two leaders also discussed China's huge trade surplus with the US.

"We will make it fair and it will be tremendous for both of us," Trump said.

US goods and services trade with China totalled to an estimated USD 648.2 billion in 2016 in which China had a lion's share with about USD 478.9 billion exports. The US exports to China stood at USD 169.3 billion, according to US trade figures.

Trump is being accorded a 'state welcome plus' by China after his arrival here on a three-day visit yesterday.

He was received this morning by Xi at the Great Hall of the People after which the two leaders attended welcome ceremony, telecast live.

Chinese troops from all the three services presented a guard of honour with a 21-gun salute.

Earlier, the two leaders introduced their official delegation to each other. Trump also introduced his son-in-law Jared Kushner to Xi.

Trump is also scheduled to meet Chinese Premier Li Keqiang and attend a reception followed by a state dinner and cultural performances.

Xi, who has been described by Trump as 'King of China' after the ruling Communist Party of China (CPC) in its once- in-a-five-year Congress conferred him a second five-year term, also hosted Trump and his wife Melania at China's 15th century Forbidden City.

During his reception to Trump yesterday, Xi said he believed Trump's state visit to China would achieve "positive and important" results.

Since Trump took office in January, the two leaders have maintained close contact. They already have had two face-to- face meetings and eight phone conversations.