Two workers killed in Kozhikode as earth caves in 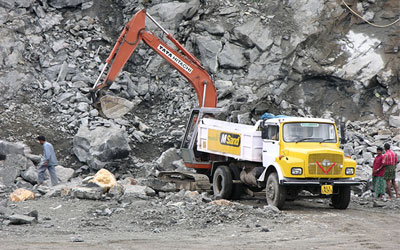 Kozhikode: Two people were killed Tuesday when a mound of earth caved in on them at a laterite quarry near here, police said.

The deceased Abdul Rahman (48) and Vinu (35) were buried under the mass of mud, which caved in suddenly, they said.

"We have registered a case under section 304 of the Indian Penal Code. The case has been registered against the land owner and three persons who runs the quarry.

We are looking into the allegations that the quarry was operating illegally," a police official told PTI.

Eyewitnesses said the earth caved in due to wet soil.

Though they were rushed to the hospital, their lives could not be saved, police said.