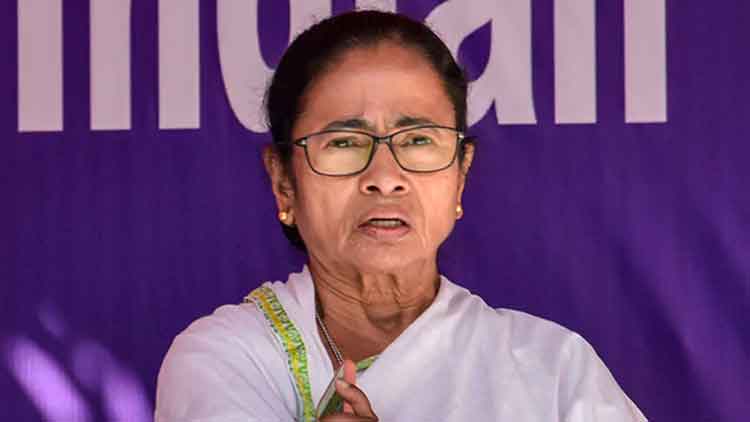 Kharagpur, (West Bengal): Claiming that India under the Narendra Modi government was going through a phase worse than the emergency period, West Bengal Chief Minister Mamata Banerjee Tuesday asserted that her government will not implement the proposed amendments in the Land Acquisition Act.

Banerjee, also the Trinamool Congress chief, urged the people to burn the "black ordinance" that was Monday approved by the Modi cabinet to amend the Land Acquisition Act to remove "procedural difficulties" in acquiring land for national projects and to "further strengthen" provisions concerning "affected families".

"This government is bulldozing democracy across the country. The Narendra Modi government has created a situation that is worse than the emergency period," said Banerjee addressing a public meeting at the Kharagpur College Ground here.

"The centre is amending the Land Acquisition Act which will allow them to snatch away your land at gun point. But I throw this challenge to them. So long as I am alive I will never allow any forcible acquisition of land. They will have to acquire land only on my dead body," she said.

The Trinamool supremo who spearheaded the Save Farmland movement in Hooghly district's Singur that eventually catapulted her to power in West Bengal, called for burning the "black ordinance".

"How dare the government take away your right to land? I will never allow such a law in West Bengal. I urge you all to take a copy of the ordinance and burn it. Burn this black ordinance, we will never allow forcible acquisition of land in Bengal," Banerjee asserted.

Banerjee also batted for her party state general secretary Shankudeb Panda who was Monday grilled by the Enforcement Directorate in connection with the Saradha scam, and accused the Modi government of unleashing the CBI to stifle the voices of protest.

"Panda was merely a salaried employee, but he is being targeted only because he is from the Trinamool. Whoever is trying to stand up, is either put behind bars or being shown the CBI or the ED," said Banerjee.

"You can cow down others but your arrests and CBI threats will have no effect on Trinamool. We will never be cowed down," asserted Banerjee.

Banerjee and her Trinamool have been against the Central Bureau of Investigation (CBI)which in its probe of the multi-crore rupee Saradha scam, has netted four Trinamool leaders including Rajya Sabha members Kunal Ghosh, Srinjoy Bose and state transport minister Madan Mitra.

Banerjee also targeted the Bharatiya Janata Party (BJP) and its national secretary S.N. Singh who has been claiming that after her party leaders it was time for the chief minister to run from the CBI.

"Their leaders come here and say 'bhag Mamata bhag' (run Mamata run). These shameless people have no manners. They say Mamata Banerjee will have to be arrested. Is it that easy? Do they think it is like popping a lollypop," asked Banerjee.

Accusing the BJP of selling the country through FDI, Banerjee urged people to stand up against the anti-people policies of the centre.